Seven-Hour Night Curfew in Maharashtra till 5th January, Quarantine for Travellers from Abroad 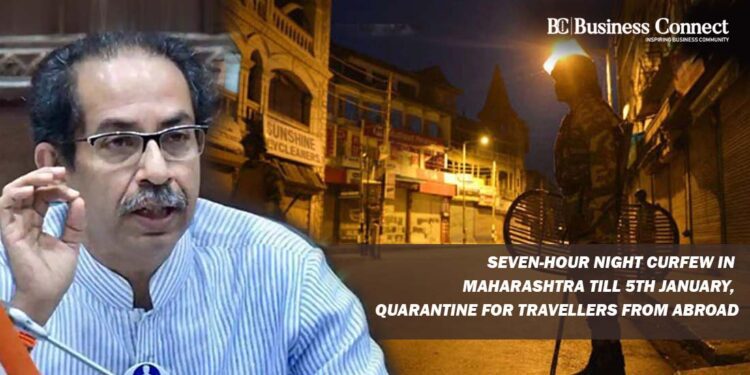 Seven-Hour Night Curfew in Maharashtra till 5th January, Quarantine for Travellers from Abroad

The government of Uddhav Thackeray has decided to inflict a night curfew for 7 hours, for the next 15 days in cities across Maharashtra and the travellers from abroad are asked to quarantine themselves. The curfew will be operational in all municipal corporation areas across the states till 5th January between 11 pm and 6 am.

The night curfew doesn’t mean that people cannot step out at all. Iqbal Singh Chahal, the commissioner of Brihanmumbai Municipal asserted that “Between a night curfew and a lockdown, there is a difference. Individuals should not come out of their homes when in a lockdown. In a curfew, within the mentioned hours, more than 5 individuals should not gather outside. So, it is still possible to run offices that operate overnight or anything like milk transport. Just as earlier, taxis, cars and auto-rickshaws will also be running.”

The reason behind the curfew being imposed is due to the violations of social distancing norms. “Even on the night of Sunday, the team of Brihanmumbai Municipal visited some night clubs and there, they found violations. This is the reason behind taking the decision of night curfew. This New Year, it is not normal that is why there cannot be normal celebrations. The curfew being imposed is to ensure that such violations should not be repeated.”

The government of Maharashtra has also decided that travellers from European and Middle-Eastern countries should be kept in institutional quarantine for 14 days. People who are landing from other countries at the state’s airport will be asked to home quarantine themselves.

Travellers who are arriving from countries like European and Middle-East are to be held at institutional quarantine facilities. The RT-PCR tests will be conducted on them on the 5th day or 7th day and then after the completion of the quarantine period, they will be allowed to go home.

The Chief Minister claimed that “Municipal Commissioners have been directed to develop institutional quarantine facilities in hotels or to develop temporary facilities near airports.”

On Monday, the decision was taken by the Chief Minister, Uddhav Thackeray in a high-level meeting. This curfew is a precautionary measure considering the new variant of the Sar-CoV-2 that is found in Britain, which is believed to be spreading faster than the previous strains. It is stated by Thackeray that the government and people had to be cautious for the next 15 days.