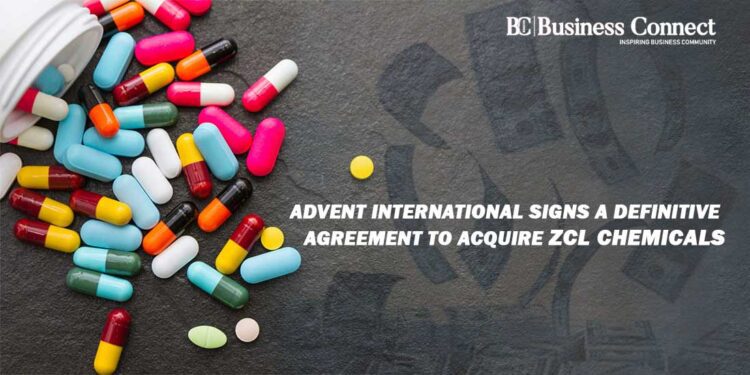 Advent International, which is a private equity firm has successfully signed a definitive agreement in order to acquire a majority stake in one of the fastest-growing pharmaceutical firm in India, ZCL Chemicals (ZCL). The business was formerly known as Zandu Chemicals.

As per the people in known, Advent elected up a 51 per cent stake in the entity that has an enterprise value of ₹1,700 crores. With this, it marks the exit of Morgan Stanley Private Equity Asia (MSPEA), which is a private equity platform that previously was managing a minority investment in ZCL.

ZCL is known as one of the fastest-growing manufacturers of speciality active pharmaceutical ingredients (APIs) as well as advanced intermediates.

The highly specialized approach of ZCL is focusing on niche therapeutic areas, which is supported by complex chemistry and by a state-of-the-art US Food and Drug Administration-approved facility, along with that it comes with strong research and development capabilities.

The managing director and head of Advent International, India – Shweta Jalan stated that “ZCL will be the third pharmaceuticals investment in India and the second one in the API space. It is a high-growth business, which is led by a capable management team, and it will be further fortifying the presence of ZCL in the API market, a key sub-sector focus.”

Advent has committed over ₹1.2 billion over the past 12 months, globally in health care. The company has also committed over $600 million in four Indian businesses over the same period in varied sectors like consumer, health care, and financial services.

The direct of Advent International India, Pankaj Patwari stated that “We are impressed with the differentiated product range of ZCL, its solid pipeline and its high quality and compliance focus. The acquisition helps us getting closer to our target of building the top five merchant API platforms in India.”

The executive director of ZCL, Nihar Parikh stated that “We are very pleased and excited about this transaction with partner Advent. We have established ZCL as one of the country’s leading pure-play API businesses in the past 12 years, and today marks an important milestone in these efforts. We are excited about the future of ZCL, and believe that the global pharmaceutical space expertise of Advent, combined with the strong manufacturing and R&D capabilities of ZCL and culture of customer-centricity, will ensure that we maintain our tradition of delivering immense customer value.”

Since 2007, Advent has been investing in India.