An unfortunate happening: Air force chopper- Mi-17V5- with the first CDS Bipin Rawat and 13 members onboard crashed in Coonoor, TN 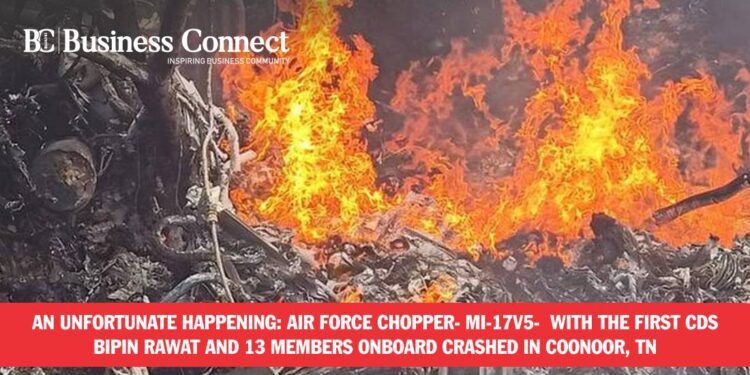 An unfortunate happening: Air force chopper- Mi-17V5- with the first CDS Bipin Rawat and 13 members onboard crashed in Coonoor, TN

Wednesday brought the shocking news of an IAF chopper- Mi-17V5- carrying Chief of Defense Staff of Indian Armed Forces– Bipin Rawat, his family members, and other army officials meeting with an unfortunate crash near Coonoor, Tamil Nadu. Many charred bodies have been extracted from the site, however, the whereabouts of the Bipin Rawat and his family members have not been tracked so far.

Sources have confirmed that 4 army personal have died in this accident that occurred near this Nilgiri district. A constant search and rescue operation has been started to look for the survivors- leading to the rescue of 7 officials. Though the eyewitnesses claim more bodies to be trapped beneath the debris, three people are said to be rescued from the place. All the victims have been sent to a Military hospital in Wellington by the rescue and emergency teams for further medical care. All of the survivors are in a critical and uncertain condition, where the teams of medical specialists are making strides to stabilize their situation.

The news triggered shock waves across the nation where many dignitaries prayed for Bipin Rawat’s well-being. Also, many luminaries took to Twitter demanding a thorough probe regarding this incident to reveal the reason behind it. But, the inductive reports assert that the bad weather near Coonoor was the primary cause behind this mishap.  The crash was reported to the police by the tribals in the forest located near Kattery- 7kms away from Coonoor in Nilgiris district. As soon as the tribals informed the nearby police station, fire, defence, and rescue departments deployed their special teams to commence the rescue operation.

The CM of Tamil Nadu – MK Stalin has been anticipated to visit the spot in the evening. The Director-General of Police – Sylendra Babu also reached the site of the accident for inspection in the noon.

How Can SMEs Leverage Video Marketing For Their Business

The Chocolate Spoon Making you taste the Toothsome