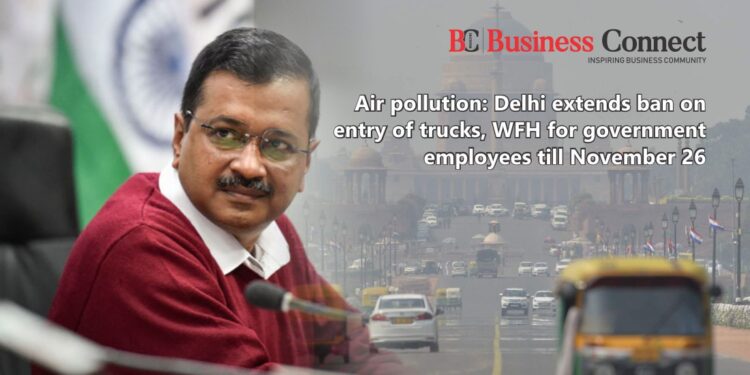 The authorities have been concerned about the air quality and pollution levels in Delhi and the National Capital Region (NCR) since the beginning of November, and the Delhi government is taking many initiatives to battle the problem and make the air breathable for all inhabitants. To reduce air pollution in the national capital, the Arvind Kejriwal-led Delhi administration has decided to extend work from home for all government workers till November 26 and put a ban on vehicles carrying non-essential products entering the city from the outside.

The government offices shall stay closed till November 26, 2021, excluding those engaging in critical services, the Delhi government announced in an official statement. It is recommended that private offices enable their employees to work from home until November 26, 2021. In response to increasing pollution levels, the Delhi government slapped a stop on all building and demolition activity in the state last week. This ban has been lifted as a result of a new government directive. Delhi’s schools and colleges would be closed until further notice as well.

The Kejriwal government opted to encourage public transportation by leasing around 500 buses from commercial operators as part of other measures to reduce air pollution in the Delhi NCR. To combat air pollution, water sprinkling devices have been installed around Delhi.

In light of the current air pollution, the Delhi Disaster Management Authority (DDMA) permitted standing passengers in Metro trains and buses to increase the carrying capacity of public transportation systems and allow more people to utilize them instead of private vehicles. The DDMA issued an order allowing 30 standing passengers each Metro rail coach. The maximum number of people allowed to travel in standing posture on Delhi Transport Corporation (DTC) and Cluster buses would be 50% of the seating capacity.

The Success Story of boAt