by Ravi
in News, Blog 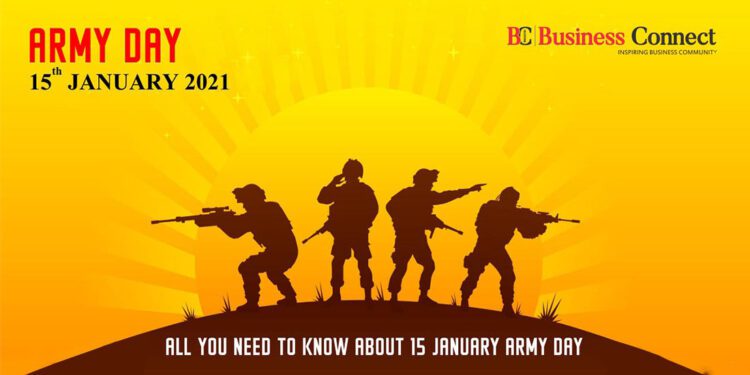 Army Day in India is observed on the 15 January every year as it is regarded as one of the historical days on which General KM Cariappa became the first Indian to take charge of the Indian Army in 1949 after the British rule. The Indian Army Day celebration and parade are typically held at ​​Delhi Cantonment, Parade Ground, where this year a marathon-Vijay Run has been organized. To this context, ADG-PI has tweeted that the marathon is to observe- Swarnim Vijay Varsh celebrations of India’s resonant triumph over Pakistan in 1971.

On Indian Army Day 2021, honourable Prime Minister of India, Narendra Modi extended his salutation to the valiant soldiers and lauded the matchless efforts of their respective families to support the military men.

The President of India, Ram Nath Kovind has also conveyed the greetings to the Indian Army via Twitter.

On Army Day, greetings to the valiant men and women of the Indian Army.

We remember the bravehearts who made the supreme sacrifice in service to the nation.

India will remain forever grateful to courageous and committed soldiers, veterans and their families.

Every year on January 15, the Army Day is celebrated to honour the Indian soldiers for their valour and unconditional sacrifice for humanity. This year, India observes 73rd Army day to honour the selfless and unrequited services of the Indian soldiers. The day is commemorated as the recognition of the event when the Field Marshal KM Cariappa took the command of the Indian Army from General Francis Butcher (A British General) on the same day in the year 1949. In this regard, the gallantry swards and sena- medals are conferred to the army men who have showcased unparalleled valour in the battlefield.

History
The real history of celebrating the army day is the transfer of power from the British to India and it signifies an important moment in Indian history from 1949. This day also honours the soldiers who have sacrificed their lives for the country in several battles. The main point of regarding it as a historical day is the command of the Indian Army powers. On that particular day, the power of the Army was handed over from General Sir Francis Butcher to Lieutenant General KM Cariappa. Hereby, 15 January is regarded big day in Indian history and marks the transfer of power from the British colonial rulers to Indians.

Outreach on economy, demand push to give big boost to growth