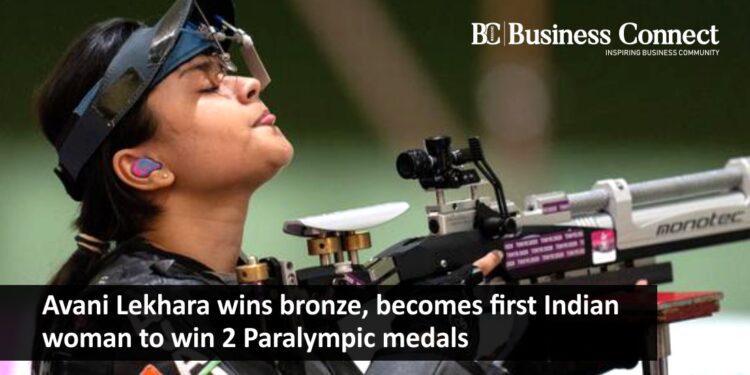 Avani Lekhara, an Indian para shooter, won bronze in the Women’s 50m Rifle 3P SH1 at the Asaka Shooting Range on 3rd August. Avani Lekhara made history by winning her second medal in the Tokyo Paralympics, making her the first Indian woman to win two medals at the same Games.

The 19-year-old, who had previously won gold in the R-2 women’s 10m Air Rifle Standing SH1 event, finished third in the R8 50m rifles 3P SH1 event. Lekhara won the gold medal with a score of 445.9 in the final.

She finished second in the qualifying round with scores of 388, 393, and 395 in the Kneeling, Prone, and Standing rounds, respectively.

The Rajasthan shooter established a global record of 249.6, which was also a new Paralympic record, after suffering a spinal injury in a car accident in 2012.

His silver medal coming in the shot put, and the two bronze in discus and javelin throw. Devendra Jhajharia, a javelin thrower, is the only multiple Paralympic medalist, however, his three medals (two gold and one silver) came in different Games editions.

Zhang Cuiping of China won gold with a new Games record of 457.9 in Friday’s event, while German Natascha Hiltrop got silver with a 457.1 in the final.

In 2012, Avani was injured in a near-fatal road accident in which her car was crushed and had to be cut open to be rescued. Her injuries were severe, including those to her spinal cord, which resulted in partial paralysis. Her father pushed her to participate in sports, and she began with archery before going on to shooting, which she found to be her life mission. She is currently pursuing a law degree in Rajasthan, India. Suma Shirur, Avani Lekhara’s coach and the national high-performance coach of the junior rifle squad, was a major factor in the gold medal win at the Tokyo Paralympics.