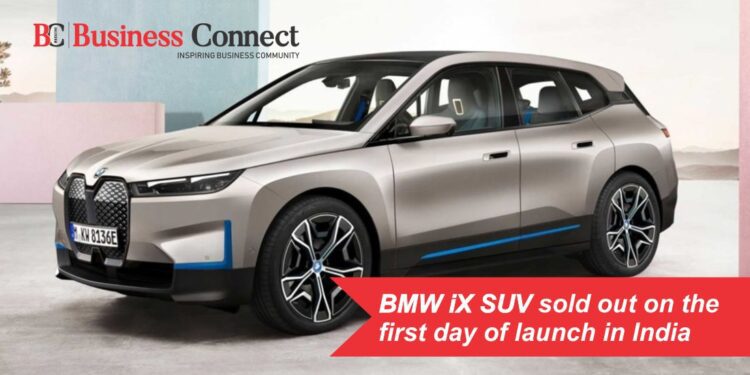 The first batch of BMW India’s fully electric all-wheel drive iX model was sold out on the first day of the sale, the company said on Tuesday (14th December 2021). On Monday (13th December 2021), the iX EV was formally introduced in India at INR 1.16 crore (ex-showroom) via the Completely Built-Up (CBU) approach. Customers were able to book online and at BMW India dealerships in the first phase, which received a huge response. The all-electric car will be delivered starting in April of next year. In the first quarter of 2022, the German manufacturer will begin the second phase of reservations.

BMW Group India’s Vikram Pawah stated that we’re ecstatic to have had such a positive response to the first-ever BMW iX. Our new technological flagship, which was born electric, represents a new way of life defined by elegant and responsible transportation. We were optimistic that the first-generation BMW iX would be a popular vehicle, but it has well exceeded our expectations. We are currently prepared to meet the requests of additional clients who are eager to buy this rare electric BMW SAV, with all units sold on the first day.

The mechanical system of the BMW iX comprises the fifth-generation BMW eDrive technology, which consists of an integrated drive unit housed in a single enclosure and driven by two electric motors (1 each on the front & rear axles). Two high-voltage batteries with a total capacity of 76.6 kWh power the motor. The vehicle’s maximum power and torque outputs are 322 bhp and 630 Nm, respectively. The new BMW EV can go from zero to 100 kilometers per hour in 6.1 seconds. The BMW iX electric is said to have a range of 425 kilometers on a single charge.

What Should You Eat to Increase Your Microbiome Diversity?

What Should You Eat to Increase Your Microbiome Diversity?