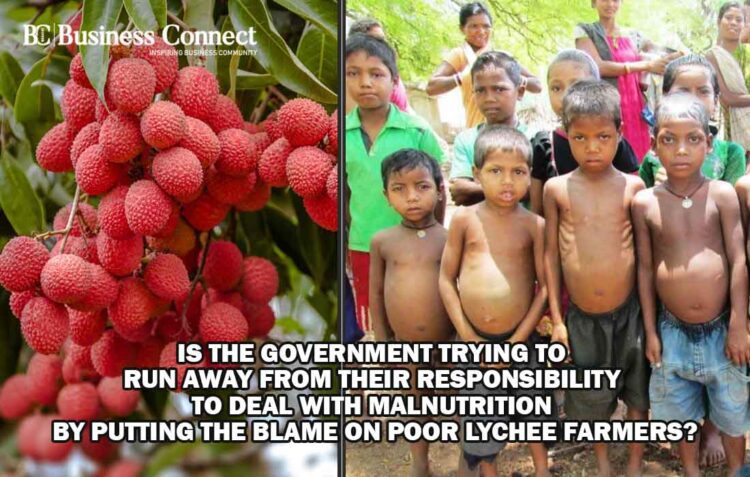 It would not be wrong if we name it as a circle of death. One of the poorest and malnourished states, Bihar is yet again experiencing a tragic return of Acute Encephalitis Syndrome commonly called Lychee Havoc, Chamki Bhukhar or Brain Disease.

Bihar has witnessed 305 cases of AES and so far more than 100 children have been grasped under the influence of this disease. Most of these deaths have been a result of hypoglycemia, or low blood sugar.  Almost all these children are below 10 years and belong to economically backward sections of society. Hypoglycaemia is caused by malnourishment and lack of proper diet

Other states which have witnessed AES are Assam, Uttar Pradesh, Odisha, and Jharkhand.

Muzaffarpur in Bihar is famous for the harvesting of lychee. About mid of May every year, harvesting of lychee begins. Majority of the population’s primary source of income is agriculture. During the harvesting season, a lot of workers, accompanied by their children spend their time on fields. These children feed on the fallen lychees and skip their dinner. The toxin in lychee lowers blood sugar level during night and these children are found unconscious in the morning.

But a thought-provoking question here is: If toxins in lychees are causing hypoglycaemia or low blood sugar then it should affect children all over the country irrespective of their socio-economic background. Of more than 100 deaths so far, all deaths have been recorded in the lower income group.

Sri Krishna medical college hospital in Bihar is the epicenter of the outbreak. More than fifty people have died in this hospital. The hospital has a bed strength of 610 while the number of patients admitted to the hospital is about 900. The hospital has a policy of not rejecting to admit any patient, thus the arrangement includes treating patients on the mattresses spread on the floor.  The government is providing free drugs and medication to all AES patient. However, many new reporters have claimed to have witnessed and even telecasted miserable medical condition. The hospital is equipped with a lack of doctors, a limited number of nurses and a few ward boys. If that’s a picture of one of the leading hospitals in the state, the condition of local hospitals may be a big cause to worry.

What are some of the contributing factors behind this disease?

While it is still a matter of research, there are several factors contributing to these deaths including, heat, humidity, malnourishment, and pesticides. Additionally, the year with high temperature and scanty rainfall witness a high number of cases. In 2018, there was adequate rainfall.  Few days of heatwaves were accompanied by passing showers. Thus the number of cases recorded in Muzaffarpur was just 7, compared to 100 deaths and still counting by mid of June 2019. This year has witnessed scanty rainfall and prolonged heat.

Why is it affecting mostly children?

Malnourished children are more prone to such disease. Liver stores glycogen. Children who are malnourished have lower glycogen reserves in the liver. If there is no glycogen reserve, the glycogen breaks into glucose. When the shortage further increases, even fats start burning. This process produces toxins which affect the brain. So, if a child sleeps without food, this whole process gets completed by the early hours of the day and then the kid is at the risk of being affected.

Is lychee is to be blamed?

It would be really foolish to put the entire blame on the pulpy fruit and significantly impact lychee farmers. You will never hear a child from well to do family is affected by eating lychee. Instead, malnourishment is a bigger reason behind so many deaths.

Both Central and state government have had held campaigns educating people to keep away from heat as much as possible and have liquid intakes.

In 2014, AES outbreak had claimed 379 lives in Bihar. Harsh Vardhan, the health minister in 2014, visited hospitals and said that adequate measures will be taken to deal with the issue. However, 5 years down the line, both, condition, and the promises still remains the same.

How not to get scammed while traveling abroad