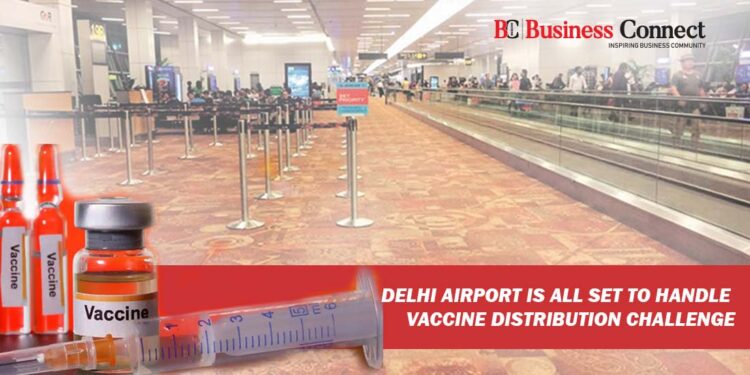 Around India, the distribution of vaccine will be posing plenty of headaches as given the size of the country, it consists of a vast population and the number of COVID-19 cases is currently at more than 10 million.

As a part of it, India’s busiest airport is getting ready to handle the vaccines of COVID-19, as per Videh Kumar Jaipuriar, the Chief Executive Officer Delhi International Airport Ltd., but there might be some issues elsewhere considering more remote areas that may not be equipped with necessary equipment and containers. He claimed that “The availability of the cold chain across India will be one of the key challenges that could be faced.”

The main point of handling will be Indira Gandhi International, the Airport of New Delhi and it will have the facility to store 2.7 million vials of vaccine at a degree Celsius of 2-to-8, along with that, it will have cooling chambers in order to keep temperatures as low as minus 20 degree Celsius.

“The Delhi Airport is all set to begin with the distribution of Covid vaccine”.

Jaipuriar stated that “As soon as the indication comes regarding what is going to be the flow, the final tune-up will be done and then everything will be ready to go.” He also added that there was potentially an opportunity to deliver vaccines to neighbouring countries.

India relies heavily on two domestically developed Bharat Biotech International Ltd. and Serum Institute of India Ltd. vaccines, which have been collaborated in order to manufacture at least one billion doses with AstraZeneca Plc. Given India’s patchy health networks and infrastructure, ultra-cold storage requirements for Pfizer Inc.’s shot make it an unlikely option for widespread use, particularly in rural areas where the majority of the nearly 1.4 billion people live in the country.

As per the Covid Resilience Ranking by Bloomberg, a measure of the best places to be in the era of Covid-19, India is a long way down the list, ranked No. 39 out of 53 economies in December, behind even the U.S. and Brazil. New Zealand remains at No. 1 with its closed boundaries, vaccine deals and virus elimination in the population.

Along with China, India is the world’s most populous nation and both of them slipped the ranking versus November. Although both countries have been successful with multiple developers in securing over two billion shots, that is less per capita coverage than many smaller locations.

Jaipuriar stated that “For the vaccine to hit every nook and corner, this is a major logistical exercise that needs to be carried out in detail.”