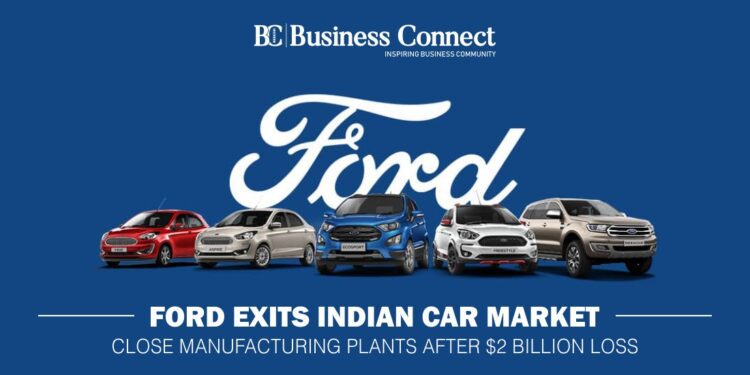 Due to “heavy accumulated losses and lack of growth in a challenging market,” Ford Motor revealed on September 9 that it is forced to stop manufacturing operations in India and close plants in Sanand and Chennai. Following the exits of American automakers like General Motors and Harley-Davidson, Ford is the next renowned brand to leave India. Ford sold 48,042 vehicles in 2020-21, a 1.8 percent share of the market, after investing over $2.5 billion and having a presence in India since 1995.

Ford claimed in a statement that it has lost more than $2 billion in operational losses in India over the last ten years and that demand for its new vehicles has been low. In a statement, Ford India CEO Anurag Mehrotra said, Despite (our) efforts, we have not been able to establish a viable way ahead to long-term profitability. Years of accumulated losses, ongoing industry overcapacity, and a lack of projected growth in India’s car market reinforced the decision, he said.

Ford has joined the list of other American automakers such as General Motors and Harley-Davidson in exiting India, a market that had once promised exponential development. Suzuki Motor Corp. and Hyundai Motor dominate the market with their low-cost vehicles. Ford India will close its facility in Sanand, Gujarat, in the fourth quarter of 2021, and its vehicle and engine manufacturing unit in Chennai, Tamil Nadu, in the fourth quarter of 2022, as part of the plan.

The American manufacturer said that it would maintain to sell cars in India through import and will assist dealers to service existing customers. Its decision is expected to have an impact on around 4,000 employees.

The move to end manufacturing comes after Ford and Indian automaker Mahindra & Mahindra failed to reach an agreement on a joint venture that will enable Ford to continue making vehicles at a lower cost than now but cease its independent business. The decision to stop production was made after the firm analyzed many other options, including collaborations, platform sharing, contract manufacturing, and the prospect of selling its manufacturing sites, which is still under review, according to the company.