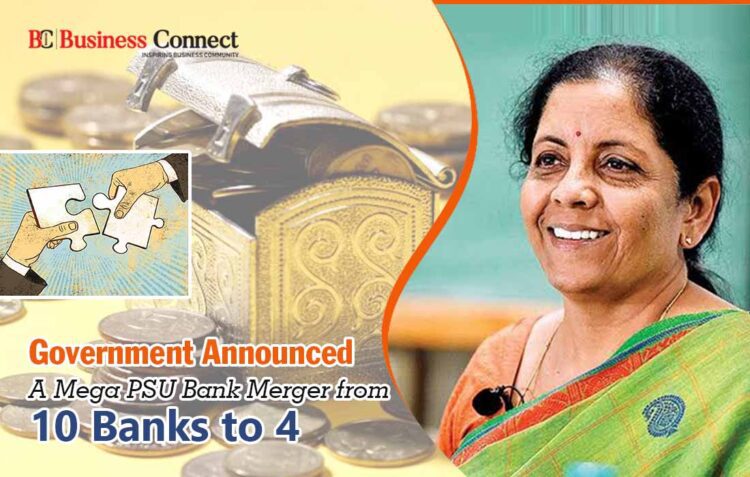 Nirmala Sitharaman, the Finance Minister of India, announced today about a big unification of public sector banks: 10 well-known public sector banks to be merged into four. The emerging process of 10 PSB’s is expected to be completed by the 31 March 2020.

According to Nirmala Sitharaman, the Finance Minister of India, Syndicate Bank, and Canara Bank will be merged into one operating body. On the other hand, Union Bank of India, Corporation Bank, and Andhra Bank will be integrated into a single body.

During a press conference on financial matters on Friday, the Finance Minister Nirmala Sitharaman announced the merger of two banks: Canara Bank and Syndicate Bank. Both of the banks are operating predominantly in South India. These two banks will be joining to form the fourth largest public-sector bank chain with an overall business of almost 15.2 lakh crore. Separately, Canara Bank has business ofRs 10.4 lakh crore and Syndicate Bank has Rs 4.7 lakh crore in business.

Combining these two banks together will make them the third-largest branch network in India with overall 10,342 branches across the country.

Apart from these banks, Andhra Bank and Corporation Bank also merge with Union Bank of India and made their combination the fifth largest public sector bank with the business of Rs 14.59 lakh crore. Allahabad Bank with the Indian Bank mega merger plan announced by Union Finance Minister Nirmala Sitharaman made it seventh-largest bank with8.08 lakh crore business.

The banks invited for discussion as top contenders for the merger from various banks that include Union Bank of India, Punjab National Bank, Canara Bank, United Bank, , Oriental Bank of Commerce, Syndicate Bank, Andhra Bank, Allahabad Bank, and Corporation Bank, etc. They arrange submits to make management accountable to board and make board committee of nationalized banks to appraise their performance.