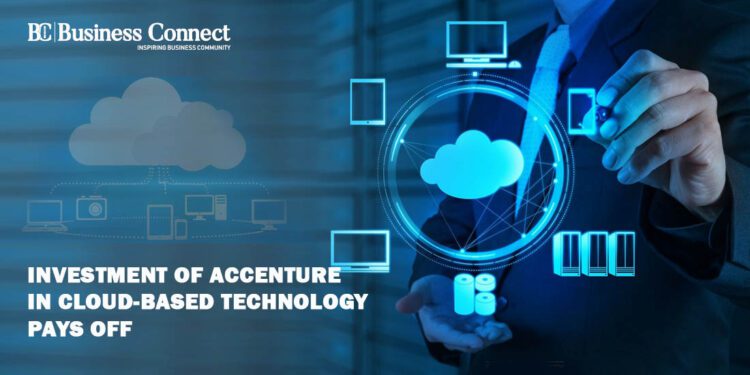 Accenture has multiplied its digital offerings in the last year by investing aggressively in cloud-based technology, which has paid off. For the quarter ended February 28, new bookings were a record $16 billion, with consultancy and outsourcing accounting for $8 billion each.

The CEO at research firm Everest Group, Peter Bendor-Samuel stated that “For Accenture, these were solid results but they are just the beginning of what looks to be a fantastic year. They have a packed pipeline, the demand is rising quickly, and we are approaching a critical skills shortage, which will be enabling them to maintain high margins. It is assumed that they are succeeding in holding standards below what they are likely to achieve.”

On Thursday, Accenture raised its full-year revenue forecast, along with that it reported an increase of 8% in Q2 revenue.

The senior director analyst at Garner, DD Mishra stated that throughout the pandemic, customers have observed to become cost-effective and drive operational efficiency. “Accenture is well-known for improving operational efficiency and lowering costs. And this particular crisis may have provided some additional opportunities for them to persuade their customers to consider the total cost of ownership, push more automation, digitalization, and try to align themselves to the market result, more cloud transitions, and so on, in order to move applications to the cloud.”

Mishra added that there has been a shift in the way Accenture deals as well. Accenture has moved from being more transformational, over the past one-and-a-half years along with now being open to look forward at legacy business. That will be giving it exposure to bigger markets.

However, analysts, on the other hand, assume that only those who were early adopters of cloud computing would benefit and that Accenture’s findings should not be taken as a blueprint for others.

On Friday, in a post-earnings note, the analysts of ICICI Securities, Sudheer Guntupalli as well as Hardik Sangani stated that “While recent outsourcing strength of Accenture has often been viewed as the leading indicator for Indian IT by consensus, it remains to be seen if it comes at the cost of the market share consolidation.”

Because of a reversion of traffic from digital to physical channels as the Covid-19 scare fades, minimal long-term visibility around a technological transition, and cannibalization or deflation of existing revenue lines, the brokerage retained its underweight stance on the IT market.

As per Mishra, Indian IT service providers have managed to exploit the opportunity posed by the pandemic, but they have faced difficulties during renegotiations with customers. Not everybody has gained equally. “The top line has eroded, along with the predicted amount of development has not materialized. They have definitely matured and are in the process of rehabilitation, and some have managed and been smarter,” he said. However, he anticipates that companies will begin to recover.

Bendor-Samuel anticipates that the industry will perform well, owing to the themes of realistic digital at scale, modernization, and the return of discretionary spending.

“Companies are left with some legacy that does not make sense to modernize as the two motors (of digital, size, and modernization) take hold. Instead of running two models, they are shifting these tails to service providers,” he said.

A HEALTHY DIET FOR A HEALTHY NIGHT