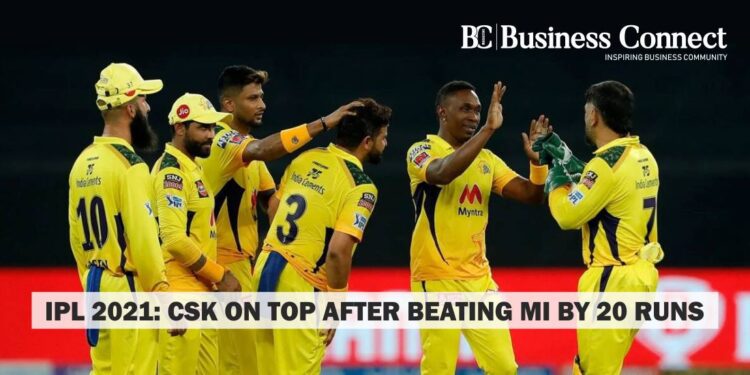 The Mumbai Indians in the first match of the IPL 2021 UAE leg. MI lost the plot while chasing 157 to win after Kieron Pollard and Krunal Pandya were out in rapid order, leaving them at 94/6. Deepak Chahar had Quinton de Kock out LBW for 17 to give CSK their first success, and he followed it up with the clean wicket of Anmolpreet Singh. Shardul Thakur then struck in his first over, dismissing Suryakumar Yadav for a big wicket. Ruturaj Gaikwad got his sixth IPL fifty in the first innings, scoring 88 off 58 balls as CSK reached 156/6.

Two wickets each for Jasprit Bumrah, Trent Boult, and Adam Milne. Gaikwad and Ravindra Jadeja put on 81 runs until Bumrah broke the partnership by taking Jadeja’s wicket. MI struck early, with Boult removing Faf du Plessis for a duck in the first over of the innings. Then, in the following two overs, Milne and Boult dismissed Moeen Ali and Suresh Raina to reduce CSK to 7/3. Milne took MS Dhoni’s wicket in the Powerplay, bringing the score to 24/4. After being hit in the elbow, Ambati Rayudu had to retire hurt.

Dwayne Bravo with a fantastic last over. MI finishes with a score of 136/8. The victory puts Chennai Super Kings top the IPL 2021 Points Table. The Men in Yellow earned a well-deserved victory. After being reduced to 24/4 in the Powerplay, they were beginning from the bottom of the barrel. However, Ravindra Jadeja and Ruturaj Gaikwad worked together brilliantly to get things back on track. Despite the departure of Jadeja, Gaikwad remained unbeaten on 88 to help CSK reach 156/6. In response, MI got off to a good start, but once the wickets started to fall, there was no turning back. Saurabh Tiwari hit a half-century, but his pace was not fast enough to reach the target.

HOW TO PLAN A TRIP