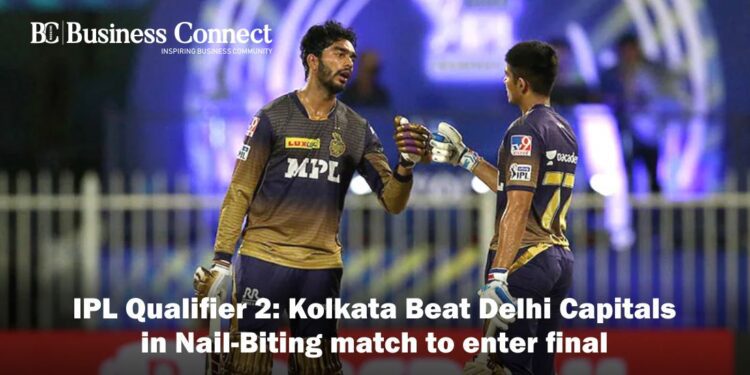 Kolkata Knight Riders (KKR) have qualified for the Indian Premier League (IPL) 2021 finals after defeating Delhi Capitals (DC) by three wickets in Qualifier 2 at Sharjah Cricket Stadium on Wednesday. Venkatesh Iyer and Shubman Gill Kolkata openers put on a 96-run opening partnership in pursuit of the 136-run goal. Iyer scored his third fifty of the seasons, while Gill scored 46 runs in the final game to put KKR in a commanding position in the chase. With back-to-back wickets and economical bowling, DC recovered towards the end.

Ravichandran Ashwin bowled the first four balls excellently and took two wickets for KKR in the deciding over, but Rahul Tripathi stole the show with his winning six on the fifth ball against the off-spinner. Varun Chakaravarthy last night did a great job with the ball, taking two wickets and keeping the DC batsmen quiet.

On Friday, KKR will meet Chennai Super Kings in the IPL finals with a chance to win their third title. The Delhi Capitals’ quest for their first IPL title continues, despite a superb season under Rishabh Pant’s captaincy. KKR has never lost in an IPL final, having advanced to the final twice (in 2012 and 2014) and winning both times.

With the strain on the DC batsmen mounting, Dhawan fell in the 15th over while attempting a big shot. Shimron Hetmyer was caught by Gill off Chakravarthy in the 17th over, but it was ruled a no-ball.