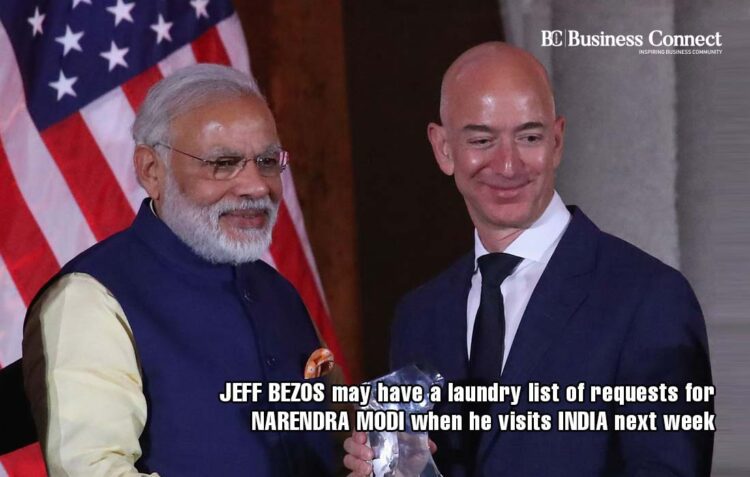 Many uncertainties, trade issues, and grievances could figure out in Bezos’ discussions with Modi for the Indian market. Jeff Bezos is coming to India next week, and his meeting with Prime Minister Narendra Modi is said to be potential and critical for Amazon’s fortunes in India. Officially, the visit is timed along with an annual SMBhav event. This event is Amazon’s attempt to reach out to the millions of small and medium businesses in the Indian country.

The Indian government has tightened the rules and regulations for foreign investment in multi-brand retail shopping. By placing the restrictions on e-commerce website and players that operate on the inventory-based model effect the retail company Amazon. This forced Amazon to pull several product lines from its website of Amazon.in. Brands like Basics, Solimo, Presto, and even Shoppers Stop is listed out from it.

However, domestic e-commerce players such as Snapdeal and Paytm Mall are competition to Amazon can accept foreign investments since they operate their business as a marketplace model. Amazon and its multinational peers including Walmart-owned Flipkart believe that this is unfair.

What is in it for Narendra Modi?

India has a fragile economy and it is looking for fresh investments such as combined with the stature of Bezos, Amazon. By doing this India will get an audience at the highest level even though the outcome of lobbying effort may be uncertain for an online business plan.

During the years, India has remained one of the fastest-growing markets for Amazon in the eCommerce platform. Due to its wide market and population, the company Amazon has pumped in over $5 billion in its Indian arm since launching in India. Hereby, this is the specific part of this meeting between Bezos and Modi.