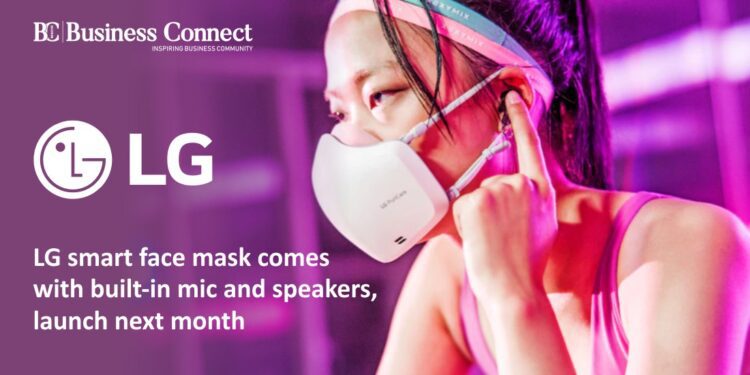 LG to introduce a face mask with a built-in microphone and speakers soon that will enable users to talk without removing the mask. The LG Puricare wearable air purifier was introduced last year, and the beta model is now being updated.

The microphone and speakers will use VoiceON technology, which removes any need for users to remove their masks or raise their voices during the conversation

Last year, LG unveiled the mask, which filters the air using replaceable air filters and built-in fans. According to LG, the new smart LG smart face mask has a smaller and lighter motor, and also built-in microphones and speakers to improve the wearer’s sound. LG’s VoiceON technology automatically identifies when users are talking and amplifies their voice through the built-in speaker, according to the company.

The mask weighs 94 grams and has a 1000 mA battery that last up to 8 hours and can be charged in two hours using an easy charge through a USB cable. The sleek, ergonomic design of the PuriCare Wearable reduces air leakage around the nose and chin to provide a tight but pleasant seal for hours, LG says.

The air solution masks also come with a case, according to LG, which helps preserve hygiene between uses. They include germ-killing UV-LED lights, and the one-of-a-kind case will charge the smart mask and notify the LG ThinQ mobile app for Android or iOS when the filter needs to be replaced for good performance.

LG, on the other hand, did not say if the mask also filters the air that users exhale after inhaling. The firm has not given a debut date but has stated that it would begin operations in Thailand in August, with more markets to follow once local regulators allow it.