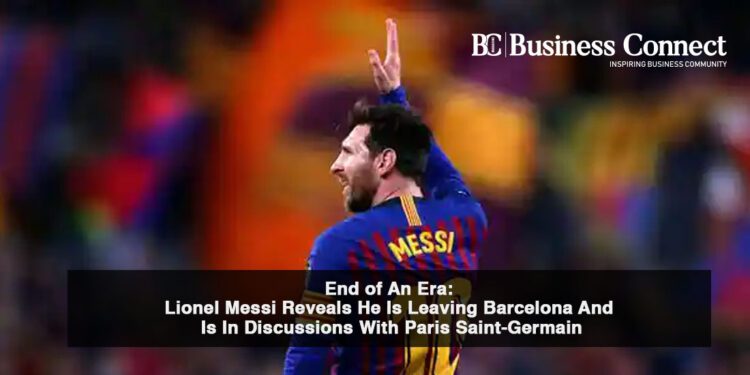 On Sunday (8th August), Lionel Messi sobbed as he bid farewell to his beloved club FC Barcelona and announced that he was in talks with Paris St. Germain about a prospective transfer.

Following Barca’s declaration last week that he could no longer be afforded after a dazzling two decades, the 34-year-old Argentine held an emotional press conference.

According to the French newspaper L’Equipe, he will go to Paris on Sunday (8th August) or Monday (9th August) to undergo a checkup and finalise an agreement with the Qatar Sports Investment-owned club.

While Messi would not confirm that he will join the Parisians, he stated that he wants to continue playing for as long as possible, adding that he still hopes to win another Champions League title.

At a press conference held, he remarked, “I’ll keep playing as long as I’m competitive and my body reacts.”

Messi stated, “I’ll keep competing as long as I can.” Messi is expected to arrive in Paris later on Sunday, according to sources from PSG. “We are not in a situation to confirm anything,” a club official stated.

RESPECT AND HUMILITY
“I tried to act with respect and humility, and I believe that stays of me when I leave the club,” an emotional Messi spoke as hundreds of fans gathered outside Barcelona’s Camp Nou stadium, many wearing his No. 10 shirt, to bid farewell to the player they called Messiah.

Messi sobbed as he stepped onto the platform before giving his press conference, and his wife Antonella Roccuzzo offered him a tissue as he battled back tears.

“This is the most difficult time of my life. I simply froze when the club told me.” He wept, “It’s like a bucket of cold water was spilt over me, and we’re still coming to grips with it.”

FINANCIAL ISSUES
Messi’s decision to stay at Camp Nou had been widely reported in the local press, with the player admitting he had agreed to a five-year contract that included a 50 percent pay cut.

“Honestly, I spoke with (Barca president Joan) Laporta after the elections (in March), we had dinner, and I was convinced I would stay,” Messi said.

“It was completely unconnected to my contract… I simply know that I did everything I could. The club argues that it will not be feasible due to La Liga. I can assure you that I tried all in my power to remain. Last year, I didn’t want to and stated so, but this year was different.” Last Wednesday (4th August), La Liga revealed that it had obtained a 2.7 billion euro private equity injection from company CVC, with the cash to be split among the teams in exchange for a 10% share of the league’s income.

It was thought that by doing so, Barcelona would be able to complete the Messi agreement. However, once Real Madrid rejected the plan and threatened to sue La Liga, Barca decided to oppose it as well.

Laporta told a news conference on Friday (6th August) that Barca’s financial situation were in a worse state than he had anticipated after conducting an audit. He went on to explain that the league told him that taking the injection was the only way they could sanction a new deal for Messi, but he refused, claiming that he had to put the club’s long-term interests ahead of any player.

RECORD BREAKER
Messi, Barca’s all-time goalscorer with 682 in 21 years, was overcome with emotion before delivering a speech and received a standing ovation from the media, present and previous teammates, and coaches in attendance.

During the performance, he was not joined by Laporta or any of the other Barcelona directors.

Following the news conference, all 35 trophies he collected during his time at the club were displayed for a “special photo session,” according to the club.

ICONIC SHIRT
Barcelona will play Juventus in a pre-season friendly on Sunday (8th August), and no one will be wearing Messi’s No. 10 shirt.

The club has not said whether it intends to keep it vacant for the upcoming season or assign it to a member of the squad.

According to La Liga rules, a squad may only have 25 senior players, therefore if Barca chooses to retire the number in his honour, they will be limiting the squad size.

4 Ways to Accelerate Your Business Growth in 2021

The Entrepreneur beyond the bounds of COVID 19