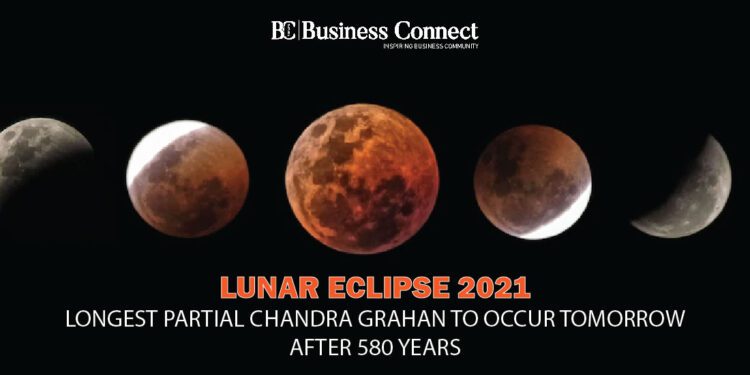 Lunar Eclipse 2021 or Chandra Grahan November 2021: On November 19, the year’s second lunar eclipse will occur. The longest partial lunar eclipse in 580 years will be seen at 2.34 p.m., with the Earth’s shadow covering 97 percent of the moon. When red sunlight beams penetrate through the Earth’s atmosphere with the least degree of deflection and fall on the moon, the moon will seem blood-red in colour. The last time a partial lunar eclipse of this length occurred was on February 18, 1440, and the next time one will occur will be on February 8, 2669.

The US space agency NASA announced on November 2 that a partial lunar eclipse would occur overnight on November 18th and 19th, when the Moon will pass under Earth’s shadow for a few hours. The eclipse will be viewable from any position where the Moon appears above the horizon during the eclipse, weather permitting. It will happen earlier or later in the evening for you depending on your time zone, according to reports.

Where to watch Lunar Eclipse 2021?

In Assam and Arunachal Pradesh, the moon eclipse will be visible in a few places. It will be seen immediately after the moonrise in the last few moments of the partial eclipse. According to reports, the penumbral eclipse will be visible for a brief period from Uttar Pradesh, Bihar, Jharkhand, West Bengal, and Odisha. North America, South America, Australia, the Pacific Region, and eastern Asia will all be able to see the partial moon eclipse.

What is Lunar Eclipse?

Petrol Price in Delhi Below INR 100 After VAT Cut: Check Latest Fuel Rates By Sanjay Maurya The citizens of...