Narendra Modi has been awarded the Ig Nobel Prize for 2020 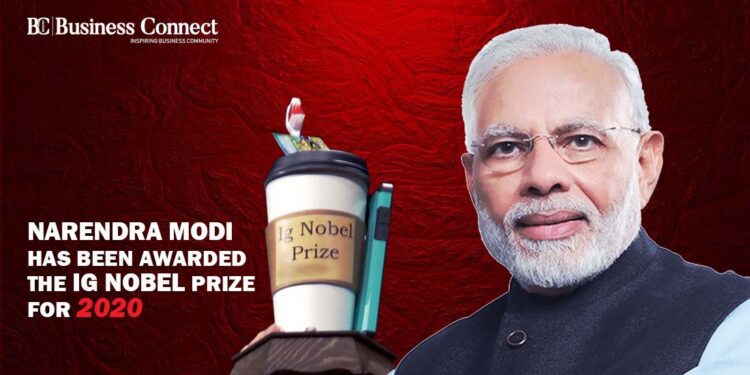 Narendra Modi has been awarded the IG Nobel Prize for 2020

At the 30th First Annual Ig Nobel Prize ceremony, Indian Prime Minister Narendra Modi is one of the nine-country leaders who have been awarded the Nobel Prize for his contribution to ‘Medical Education’.

According to a statement, these leaders are awarded the Nobel Prize for using the ‘COVID-19 viral pandemic to teach the world that politicians can have a more immediate effect on life and death that scientists and doctors can’.

Along with Narendra Modi, the award is shared by the heads of the governments listing Jair Bolsonaro of Brazil, Boris Johnson of the United Kingdom, Andrés Manuel López Obrador of Mexico, Alexander Lukashenko of Belarus, Donald Trump of the USA, RecepTayyip Erdogan of Turkey, Vladimir Putin of Russia, and Gurbanguly Berdimuhamedow of Turkmenistan. (SOURCE: eurasiantimes.com)

Talking about the award, the IG Nobel Prize is a satirical and parody prize that is awarded yearly since 1991 by a magazine known as ‘Annals of Improbable Research’, which is specialized in scientific humourous coverage. The award celebrates ten unusual achievements in scientific research. The award aims to ‘honor achievements that first make people laugh, and then make them think’.

The awards are usually presented by Nobel Laureates at a grand ceremony at Harvard University in the Sanders Theatre. But due to the ongoing Coronavirus pandemic, this year, the event was held online.

From India, Prime Minister Narendra Modi is not the first one to win the prize, previous Indian Ig Nobel Laureates includes Atal Bihari Vajpayee, who won the 1998 Peace Award for ‘Aggressively Peaceful Explosions of Atomic Bombs’. There are other laureates with Indian affiliations as well.