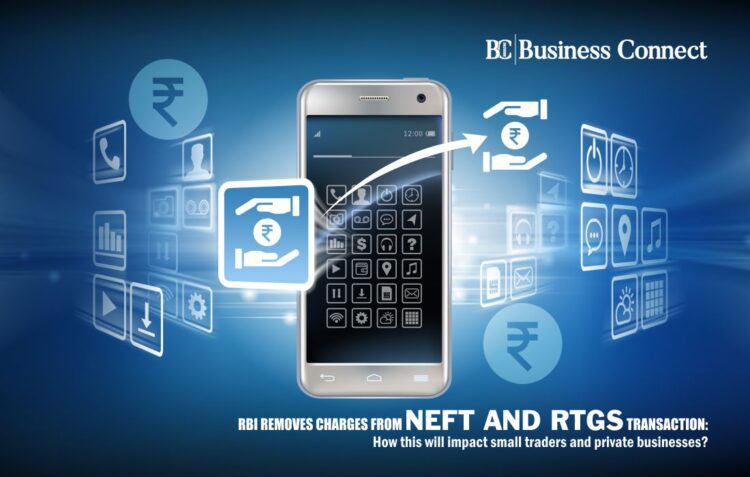 RBI removes charges from NEFT and RTGS transactions: How this will impact small traders and private businesses?

Since its initiation back in the year 2014, current Modi government was very clear on its multiple agendas. One such agenda was to promote digitalization across the country. A step in this direction was taken on June 6, 2019, where Reserve Bank of India announced that it would remove charges from NEFT and RTGS transactions. What that means is the cost of transacting through NEFT or RTGS will either be free or reduced heavily. This move will in many ways encourage the digital transactions.

The transfer can be carried out by using the internet banking facility or by submitting the remittance form at the remitter’s bank branch. The minimum amount that can be transferred by RTGS is Rs. 2.00 lakhs and there is no such limit for transfer through NEFT.

Reserve bank of India imposes certain amount of charge on banks for Real Time Gross transaction (RTGS) and National Electronic Funds Transfer (NEFT). These charges are then passed by banks to their customers. After this new announcement by RBI to do away with the charges, small traders and individuals will benefit directly.  In India with so much of poverty around, people still follow the principal ‘Every penny saved is a penny earned’. Small traders and private businesses have small funds. Even a small amount of transaction charges are seen as an expense thus diverting them from taking online transaction. Such initiative to remove charges from NEFT and RTGS will imbibe confidence in public. As the news spreads, the long queues in the bank to transfer funds would eventually get replaced by digital methods.

To give you an idea, the table below shows the transaction charges by ICICI bank for NEFT and RTGS transaction.

This is what ICICI bank charges towards NEFT and RTGS

This move by Reserve Bank of India has certainly given a huge boost to Narendra Modi Government which has been focusing on digitalization campaign. Now the private businesses and small traders would switch to net banking, which certainly is cost and time efficient.

Though there are certain things which needs to be strengthen. With the rise of digital India, there will be more cybercrimes. To overcome this, government needs more stringent policies protecting people’s money. The faith needs to be built that online transactions are safe. A large section of India (especially rural India) still does not have faith in online transactions. Additionally, India also needs better electricity and internet connectivity in rural areas for net banking transactions to gain speed.

Nevertheless, a thoughtful action implemented by the Reserve bank of India is yet another well-guided step towards electronic methods of transaction.