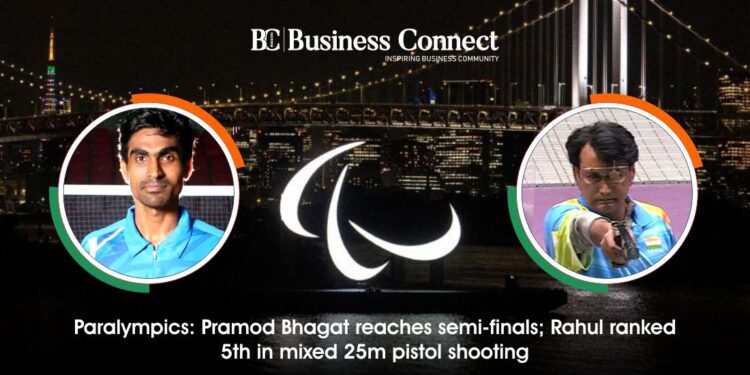 After defeating Ukraine’s Oleksandr Chyrkov in his second group, world No. 1 Pramod Bhagat advanced to the men’s singles semifinals. The country’s shuttlers delivered great performances in a match of the Tokyo Paralympics badminton event here on 2nd August.

Today I was in the zone and played exceptionally well. Oleksandr Chyrkov is a talented player who produced some impressive strokes during the match. Bhagat expressed his delight at reaching the semi-finals. On 3rd August, Bhagat and Palak Kohli will compete in the mixed doubles class SL3-SU5 against Siripong Teamarrom and Nipada Saensupa.

After a stunning comeback to qualify in second place, Rahul Jakhar of India was unable to recreate the feat in the final, finishing fifth in the P3 Mixed 25m Pistol SH1. Jakhar put forth an outstanding performance in the qualifying stage’s rapid section, finishing with a score of 576.

He safe the first elimination round in the final as Ukraine’s Iryna Liakhu was eliminated in a shootout with China’s Yang Chao. The next to leave was the Chinese shooter, who completed with a score of 5. With a score of 9, Turkey’s Korhan Muharram Yamac was the third player to be eliminated.

Jakhar was eliminated just as it appeared, he might advance to the medal rounds, scoring only 1 and 1 point in the next two shots to end with a score of 12. Sergey Malyshev of the Russian Paralympic Committee finished fourth with a score of 17, losing in a shootout to Oleksii Denysiuk of Ukraine, who won bronze with a score of 20.

Xing Huang of China, who won the qualifying round, won the gold medal with a score of 27, a Paralympic Games final record. With a total score of 576, Jakhar was previously ranked second behind China’s Xing. Xing received a score of 585 (294 precision, 291 rapid), while Yang Chao came in third with a score of 575. (precision 289, rapid 286).