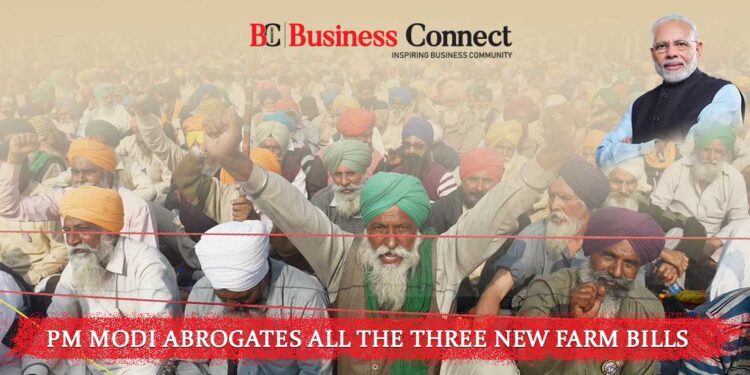 Friday morning came with the stirring news of the Central Government repealing the most controversial three new farm legislation. This information was released by PM- Narendra Modi himself where he also conveyed that the bill will be nullified by the end of the month(winter session). He anticipated putting an end to almost one year long farmers’ countrywide protest with this decision. The official announcement was released on Guruparb-the birthday of the very first Sikh Guru- Guru Nanak.

Who isn’t aware of an active protest started by the farmer’s community across the country, especially in New Delhi and nearby areas? Though the Government strained every nerve to educate and inform the farmers of the benefits of these bills where small farmers were to be benefitted majorly, a few groups of the community refused to take the notice of their claim and continued with the protest.

“For past one year, we diligently tried to explain the advantages to the farmers regarding our decision to ensure multi-faceted approach from seed technology, crop insurance schemes in the agricultural practices. These exclusive bills were created after considering the demands of farmers, economists and agricultural maestro. We also intend to modify the laws as per their wish and even suspend those too. Even this matter has also reached the Supreme Court. But we failed to explain our side to our farmers, hence we have decided to abrogate these bills soon,” he added.

At present, the Government has already offered one-lakh crore as compensation to the farming community and soon, will implement Zero Budget Natural Farming to facilitate efficiency in line with MSP. These initiatives have been accompanied by Bima and Pension benefits with several other direct lucrative transfers. On that note, the Prime Minister of India revealed, “We have concluded to form a committee that will align Centre, State representatives, farmers, scientists, and economists towards a common objective. We will leave no stone unturned to work for our farmers.”

Subsequently, many political figures have welcomed this decision that will reduce the farmer-led agitations happening across the nation.

Must Ask These Three Questions When Suffering from Moral Distress.