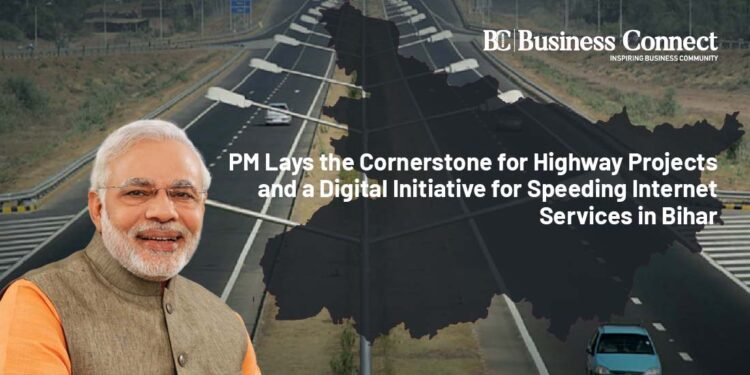 India’s Prime Minister NarendraModi has laid the cornerstone for nine highway projects in Bihar on Monday along with launching a digital initiative project of “HarGaon Optical Fibre Cable” for speeding the internet services, which will connect all villages of Bihar.

“History has witnessed that only that nation progresses, which invests heavily in infrastructure. Today, highways are being constructed at double the earlier speed. Investment in road construction has also been increased five times,”PM Modi said at the event.(Source: ndtv.com)

Addressing on the occasion, the Prime Minister said that these highway projects will help in improving the connectivity in Bihar. The project includes the construction of 3 large bridges, an upgrade of highways into 4 lanes as well as 6 lanes. NarendraModi entitled the day as Historic not only for Bihar but for the entire country as the Government is coming up with major steps to make its villages the backbone of AtmaNirbharBharatand the starting point occurred to be with Bihar. Under the digital initiative project, 6 Lakh villages which include the 45,945 villages in Bihar, would be provided with internet services through Optical Fibre cable in 1000 days.

“While making plans for road development in Bihar, the government has given due weightage to the construction of bridges over the rivers. As a result, 17 river bridges are being made in Bihar. Due care is being given towards developing a multi-modal transport system in the country,” PM Modi said. (Source: ndtv.com)

“The Government has announced to spend more than ₹ 110 lakh crore on infrastructure in the coming four to five years. Out of this, projects worth more than ₹ 19 lakh crore are allocated for the development of highways alone,” he added. (Source:ndtv.com)

At the event, the Prime Minister’s efforts for upliftment of the state was praised by Nitish Kumar, Chief Minister of Bihar.

By the time, highway projects will be completed, Bihar will have a revamped look and there will be connectivity between all rivers.Bridges and all major national highways will be seen widened and strengthened.

Skyislimit Technologies: Serving as a platform for inspiring the innovation