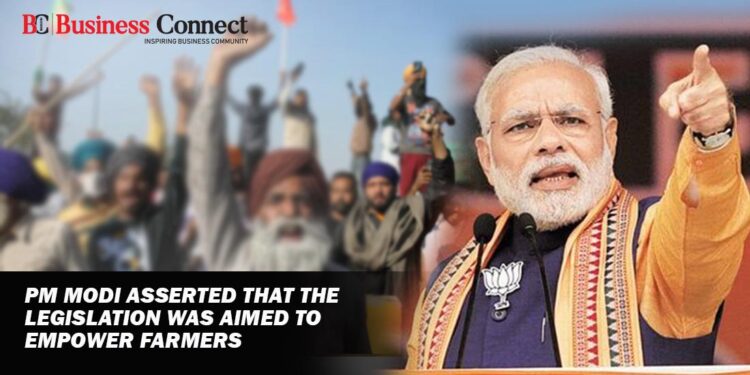 In the backdrop of the farmer’s protests regarding the new central farm laws, it was asserted by Prime Minister Narendra Modi that the aim of the legislation was at empowering farmers and to provide them bigger markets and better prices.

In the parliamentary constituency of Varanasi, while addressing a public meeting, the opposition was accused by Modi for spreading misinformation and rumours regarding the new farm laws by saying that those who were behind shouldering a legacy of deceiving farmers were at it again.

It was stated by Modi that the quality of Indian farm produce was recognized all over the world and the farmers were entitled to get access to bigger markets in order to increase their income. “With the help of new law, farmers will not only get better options by being able to sell their produce at remunerative prices but they will also be provided with a legal shield, ever since the earlier laws were prohibiting the sale of agricultural produce outside of the notified mandis.”  He stated.

He also stated that however, if any farmer still prefers to sell his produce in the mandis at the (MSP) Minimum Support Price, then the new law will not bar them from exercising this option too.

Adding that if this system were to be abolished, the government would not be pumping money in the notified mandis. “In fact, in order to modernize the mandis, the government has been investing in them liberally.”

It is claimed by Modi that under the preceding regime, nearly ₹49,000 crores had been paid by his government for the procurement of pulses at the MSP during 2014-19 against the corresponding purchase of pulses worth only ₹650 crores (2009-14). Similarly, during the current regime, paddy and wheat procurement was far higher than that of the previous government.

He identified several farm-related schemes of the central government, including Pradhan Mantri Kisan Bima Yojana and Pradhan Mantri Fasal Bima Yojana, to hit back at the opposition parties, who, he claimed, were trying to slither his government’s pro-farm decisions.

Modi stated that in earlier regime, there was black marketing of urea, while the farmers were getting an adequate supply of fertilisers now, even during the time of coronavirus pandemic.