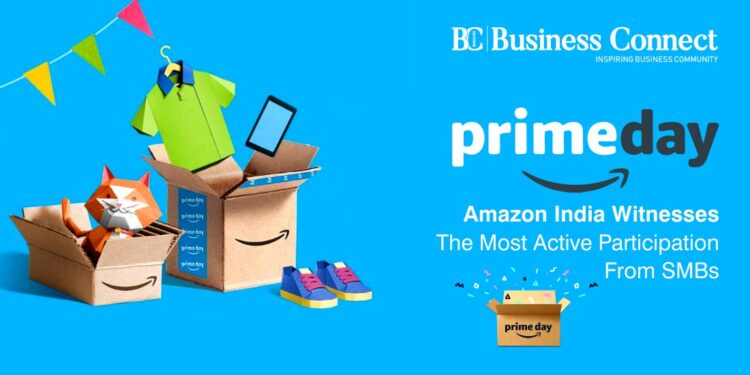 In India, e-commerce behemoth Amazon received the most attention for its main event Prime Day this year. Prime Day 2021 saw the largest number of Small-Medium Businesses (SMBs) ever selling on Amazon, thanks to an outpouring of support from Prime members.

As the coronavirus epidemic has pushed the adoption of e-commerce across the country, Amazon competes with Walmart-owned Flipkart, Reliance’s JioMart, and Tata-owned BigBasket to capture the growing online retail industry.

Customers from more than 96% of India’s pin codes placed orders. The month leading up to Prime Day was Prime Video’s most popular month ever. In addition, Prime Music had the largest number of listeners.

Prime members bought from 126,003 vendors, including artists, weavers, women entrepreneurs, start-ups and brands, and small offline neighbourhood businesses, throughout the run-up to and on Prime Day. Sellers from around India participated, including those from tier 2-3-4 cities such as Champhai (Mizoram), Barnala (Punjab), and Virudhunagar (Tamil Nadu). Valsad (Gujarat), Guntur (Andhra Pradesh), and Shajapur (Madhya Pradesh) are among the others. When compared to the previous Prime Day, almost 31,230 merchants had their highest-ever single-day sales, with nearly 25% more sellers grossing over ₹1 crore.

“Prime members shopped from over 126,000 small and medium businesses (SMBs) and stores spanning (over) 6,800 pin codes, making it the largest ever sales for SMBs on Amazon,” said Akshay Sahi, director, prime and fulfilment experience, Amazon India.

Salman Ali of ‘Star Fashion JPR’ in Jaipur stated, “We started our company two years ago in Amazon Karigar, and before that, we were selling mainly in local markets catering to a restricted client base and had little income.” “We are delighted with our sales, and our Block Printed Kurtis collection received a lot of attention on Prime Day 2021. Prime Day is a wonderful boost for our little business, and it directly helps to restore the lives of our Rajasthani rural artisan community.”

The most popular categories in terms of units sold were a personal computer, beauty, clothing, home and kitchen, cellphones, and pantry.

Members continued to buy computers, printers, monitors, TVs, wearables, and storage as they worked and studied from home. In laptops, the leading brands were HP, Lenovo, Dell, Asus, and Apple. Large appliances were popular among members, with LG and Samsung washing machines and Whirlpool as well as Samsung refrigerators among the best-selling brands.

“We’ve been in operation for four years and only went live in 2021. Our team is overjoyed after witnessing a massive increase in daily orders during our first Prime Day. We noticed a 5X increase in order volume,” said Brijesh Mishra of Home UPS, which is part of Amazon’s Local Shops on Amazon programme in Chennai. During the event, “we received orders from 71 pin codes across Chennai and Kanchipuram. This has helped us stay afloat during these difficult times.”

Narappa (Telugu), Sarpatta Parambarai (Tamil), and Malik (Malayalam) were all viewed in over 3,200 towns and cities in India, as well as more than 150 nations and territories across the world. This demonstrated the rising popularity and viewership of local language films not only in India but throughout the world.