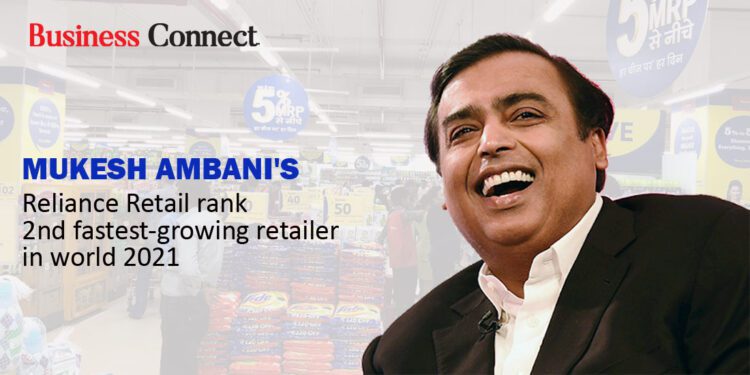 Reliance Retail ranked 2nd fastest-rising retailer globally in Deloitte’s 2021 ranking, down from first place the previous year. According to the Deloitte survey, it is now ranked 53rd among Global Retailing Forces, up from 56th previously.

The list is headed by US retailer Walmart Inc, which maintains its status as the world’s largest retailer. Costco Wholesale Corporation of the United States fell one position to seventh, led by Schwarz Group of Germany.

Seven of the top ten retailers are from the United States, with one from the United Kingdom (Tesco PLC at 10th position). Other US stores in the top ten include The Kroger Company (ranked fifth), Walgreens Boots Alliance, Inc (ranked sixth), and CVS Health Corporation (ranked 9th), Aldi Einkauf GmbH & Co. oHG and Aldi International Services GmbH & Co. oHG from Germany are ranked eighth. In the global list of 250 retailers, Reliance Retail is the only Indian retailer.

It appears in the ranking of Global Powers of Retailing and the World’s Fastest Retailers for the fourth time in a row.

Last year’s Fastest 50 champions, Reliance Retail, fell to second place. At fiscal year’s end (FY20), the business had grown by 41.8 percent year on year, owing to a 13.1% rise in the number of stores across its consumer electronics, apparel, and lifestyle, and grocery retail chains, which counted 11,784 stores across 7,000+ towns and cities in India According to Deloitte.

In 2020, Reliance Retail bought Vitalic Health and its online pharmacy site Netmeds in August, and a 96% interest in online home decor firm UrbanLadder in November. In terms of the global outlook, Deloitte stated that the planet was faced with both hope and peril in the early months of 2021.

“On the plus side, COVID-19 vaccines were being distributed, showing that the COVID-19 detrimental effects will be lessened dramatically later in 2021.”

On the minus side, the virus appeared to pose a danger to economic stability, especially in areas where it was already widespread, and it threatened to become a concern elsewhere if new and more virulent strains of the virus spread widely.”

Also in countries where the epidemic was spread, social distancing interventions to prevent a new outbreak had a negative economic effect, according to the study, which added that the priority for politicians was to monitor the existing outbreak, protect those who had been affected by it, and speed up the delivery of approved vaccines.