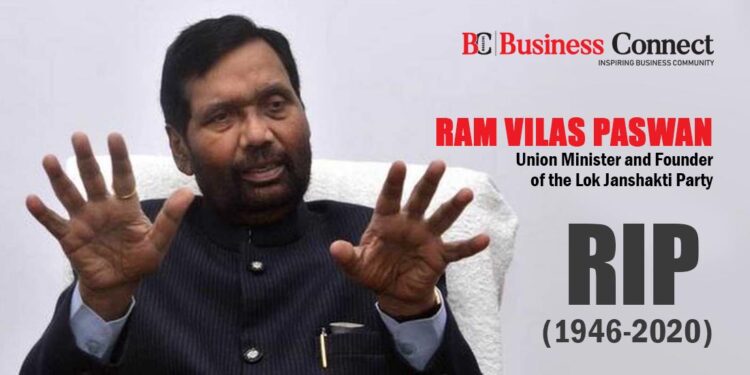 RIP
Oct 9, 2020, Ram Vilas Paswan (Union Minister Ram Vilas Paswan) known as a leader of the Dalit, one of Bihar’s most prominent faces, passed away. Death was confirmed by His son Chirag Paswan. Paswan had heart surgery last week. Even after that, he was in critical condition with multiple organ complications.

Biography
Ram Vilas Paswan was born In July 1996 in Shaharbanni, Khagaria district of Bihar. His father&#39;s name was Jamun Paswan and mother Siya Devi. As far as his qualification is concerned, Paswan did a bachelor in laws and master in arts from Kosi College, Khagaria, and Patna University respectively.

Paswan was a very talented person. There are very few people who might know that Ram Vilas Paswan had cracked BPSC (Bihar Public Service Commission) exam. However, he didn’t accept the post as a DSP.

Political Career
In 1969, Ram Vilas Paswan became a member of the Samyukta Socialist Party (“United Socialist Party”) from a reserved constituency. 45 years ago, when an emergency was declared in India, He was arrested and had to spend the entire period in jail. On being released from, he got the opportunity to become a member of the Janata Party. For the first time, he won the election to parliament by the highest margin, which was a world
record for winning the election.

Ram Vilas Pawan was again chosen to the 7th Lock Sabha election in 1980 and 1984 from Hajipur constituency. In 1983, Paswan formed an organization called Dalit Sena for Dalit emancipation and welfare.

Pawan was chosen again to the 9th Lok Sabha in 1989 and was designated as a Union minister of labor and welfare in VP Singh Gov. In 1996, he also led the governing alliance in the Lok Sabha as PM was a member of the Rajya Sabha.

In the same year, he was appointed Union Railway Minister. He held that position by 1998. Later, Paswan was the Communication mister, he holds that post from Oct 1999 to Sep 2001. He shifted to the Coal Ministry, held that till April 2002.

In 2000, Paswan resigned from Janata Dal, created a new party known as a Lok Janshakti Party.

Elections
Pursuing Lok Sabha Election 2004, he conjoined the United Progressive Alliance Government and became the Union Minister in the Ministry of Chemicals and Fertilizers and Ministry of Steel. For the Indian general election 2009, he alliance with Lalu Prasad Yadav’s party called Rashtriya Janata Dal. It wasn’t worked out at all. He separated from RJD and United Progressive Alliance Government, the Indian National Congress was a new alliance. Later he was joined by Mulayam Singh Yadav and declared the fourth front. But it didn’t go well, Paswan lost the election from Hajipur for the first time in 33 years. His party had won only 4 seats in the 15th Lok Sabha.

He won the election of 16th Lok Sabha from Haripur Constituency and aligned with NDA. In 2014, Paswan has again held the post of the Ministry of Consumer Affairs, Food and Public Distribution. It continued in the 2nd Modi ministry 2019.

Here are some Condolence by Leaders

Narender Modi (Prime minster of India)
“I am saddened beyond words. There is a void in our nation that will perhaps never be filled. Shri Ram Vilas Paswan Ji’s demise is a personal loss. I have lost a friend, valued colleague, and someone who was extremely passionate to ensure every poor person leads a life of dignity”

Arvind Kejriwal (Delhi chief minister)
“Heart condolences on the demise of Union Minister Shri Ram Vilas Paswan Ji. My thoughts and prayers are with his family and loved ones.”

Ms. Tanvi Somaiya: The Woman who built The Bear House