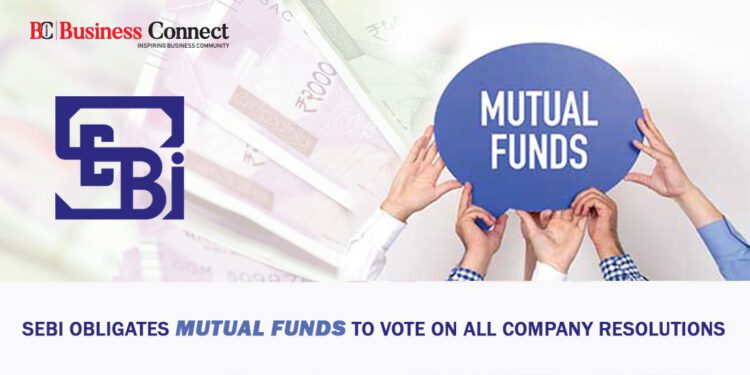 It has been made mandatory by the Securities and Exchange Board of India (SEBI) for mutual funds to vote on all company resolutions. It will be effective from 1st April 2022, the regulator wants all mutual fund schemes to vote on the resolutions, even if the equity share of the company are held as passive investments through ETF, which is an exchange traded fund or an index fund.

The fund house will only stay away from the vote if there is no capital investment in the business on the day of the vote.

Casting vote at the scheme-level:
Until now, votes were made at the house-level of the fund. However, votes can now also be cast at the level of the scheme if the its Fund Manager has a different opinion than the Fund House.

Now, mutual funds will have to make sure that they cast vote on basis of the resolutions related to corporate governance matters, stock option plans, changes in capital structure along with other management compensation issues, social and corporate responsibility, appointment and director’s removal and any other issue that might affect shareholder’s interests and the interests of the unitholders holding units of mutual fund schemes.

Mutual fund schemes would still have to be subjected to a compulsory vote on related party transactions. These are the transactions that investee companies enter with the parent company, subsidiaries or another company from the same business group.

Fund managers will also have to make a declaration to the trustees of the fund house every quarter that the votes cast have not been affected by any factor “other than the best interest of the unitholders.” The trustees shall be expected to confirm this in their half-yearly report to SEBI. These Regulations will be in effect on 1st April 2021.

Funds are also expected to publish on their websites and also in their annual reports how they voted on the different proposals submitted by their investment companies.

Meanwhile, earlier this month, SEBI proposed strict requirements and appointment rules for independent directors of listed companies to protect minority investors. The regulator proposed that if listed companies in India intend to nominate or remove independent directors, they should require the “dual consent” of the shareholders and the majority of the minority investors of the company.

If either condition is not met, a new individual will not be named and current independent directors cannot be dismissed, SEBI stated in its proposal, which is open for public consultation until 1st April. The proposal may be updated after SEBI receives public consultation and there is no definite timeframe for its implementation.