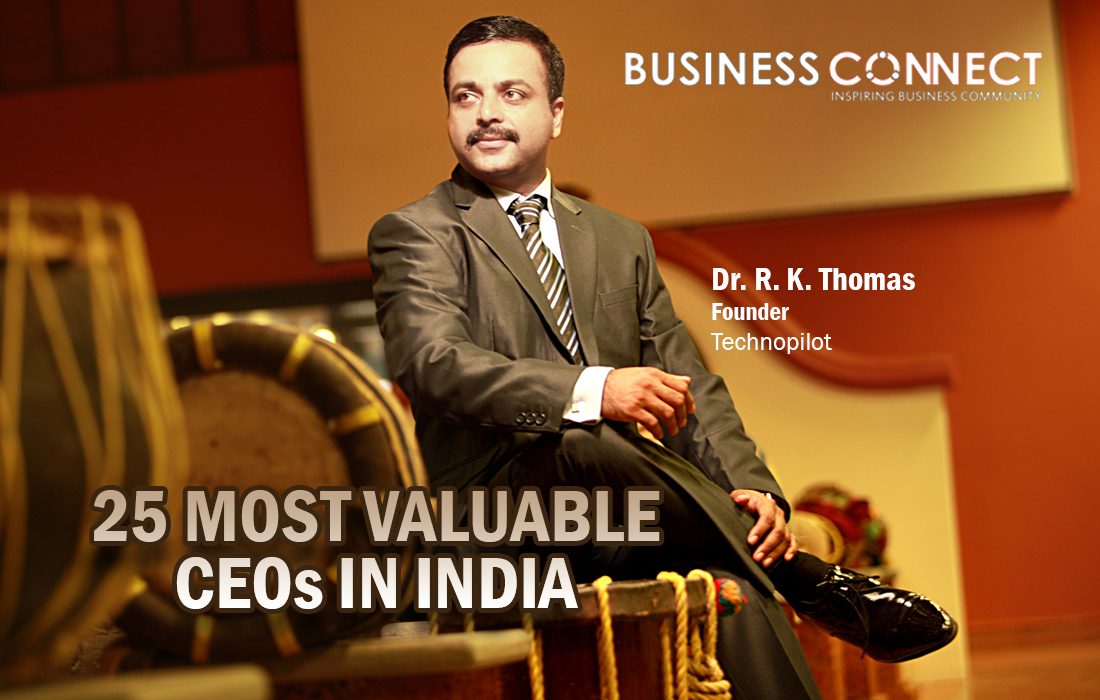 Business Success mantras and healers by virtue of its veteran founder

On a daily basis, we get to hear numerous legendary anecdotes of our military officers and defence personnel who dared to put their life at stake for the safety of citizens. But rarely do we get to know something regarding their entrepreneurial intuition. It doesn’t mean that such people do not exist. There are people who not only have served the nation as a soldier but they have shown their knack by displaying leadership skills and providing pioneer services in their domain. One such outstanding personality is Commander (Dr), R.K Thomas. His 20 years of military service in aviation made him realize that society needs a larger social fabric to see the larger picture towards alleviating pain and poverty in humanity. Keeping this in mind, he established his entrepreneurial venture Techno Pilot.

The company originated in the year 2013 with an aim to provide a large umbrella under which one can be provided with services of various nature from Network Security and Business Success Coaching to Healing in organizations and for individuals. The company plants the seed into the clients’ business that exceptional leaders are manufacturers of success. By means of its Energy Healers, it offers well being for individuals and employees, with its trademarked modality Divine Grid Healing and distance healing services. These services incorporate the real scientific laws that can bring about a change in the physical and psychological health of individuals and business.

The company wants itself to be the one working hard with the technologies of the future. At present, it is already working on such technologies of which many are not even being researched in any university till date. It wants to use them to herald a new future for societal advancement, improved living and social conditions. The company is developing the security systems of the future embedded with multi-layered Elliptic Curve Cryptography, Nanotechnology dovetailed with Laws of Quantum physics and using esoteric laws, which are not much in vogue in the present time.

The company specializes in proactive threat protection and develops software that reacts immediately to new & emerging threats and protects users in real time. The company ensures the superior protection by using three methods of detection instead of one, thus enabling its products to detect and destroy threats that others miss. Built to run unnoticed in the background, its security solutions deliver ultra-fast scanning with an extremely low system footprint. This means users will never have to compromise fast performance for effective protection. The company realized earlier that it needs to embody newer frontier technology and methodology, including usage of Scalar waves, towards achieving one-of-a-kind enhanced Threats Intelligence and Protection in the Cybersecurity domain.

Cyber-attacks on international vital infrastructure persist to enhance in frequency and severity. The pillars of vital infrastructure will hence have to defend themselves from hacks, sponsored attacks, virtual terrorism, business spying, and other detrimental upcoming threats. Archaic strategies such as anti-viruses and firewalls are no match for the black hat hackers these days. Urbane hackers can now easily gain access to vital control systems, potentially bankrupting a business and international economy, bringing humanity to a closedown. There has never been a greater need for a Proactive Defense for sprouting Cyber Threats. A project was undertaken by Techno Pilot to tackle many of these challenges and the results documented. The company has categorized the expectedness of attacker/defender matrix and has moulded its conclusion to craft a structure for designing proactive defences for enterprise networks.

Moreover, the company is differentiated by its trailblazing healing services too. The healing services provided by it comprise a full and complete resolution of the causes of imbalance or disease. It works on the Divine Grid Healing which is concerned with helping all its clients to access information and therapies. It helps them to create healing in every aspect of their lives on every level of the body, mind and spirit. The company has studied almost all the healing modalities in vogue today. The aim of the company is not to make huge profits. It solely originated with one aim and a resolve to help people and organizations to grow, succeed and have credibility. Healers are not new to the Indian psychology. It got recognition for centuries what modern physicists and quantum scientists have only recently become aware of.

Clientele spread across the globe

Those who have experienced its services and mode of treatment share their experience with others and thus approach it. That is how people get connected with it through networking. The company has ensemble clients spread across India, UAE, Kuwait, Mozambique, Germany, USA, UK, Canada, Russia, Singapore, Puerto Rico and Alaska which makes its presence and growth in those countries too.

The company has the best consultants in the world working for it in the niche areas of its work. Every person working here practices a rich principle which inspires them to give society much more than what they take from it. Profit Making is hence not central to the business plan of the company. Its healing modality works with mathematical and defined scientific laws. Its milestones are dovetailed as a close fabric with its mission and vision. It has projects being started in major cities in India and a few in the Gulf region and the USA.

The company is focusing to strengthen channel ecosystem and increase its presence in India across Tier 2 and Tier 3 cities. By 2020, it wants to be present in all channels of distribution in order to reach out to potential customers and provide flexibility in licensing by partnering with Managed Service Providers. The company has foreseen that there will be no more operating systems to compromise in the next five years. Operating systems would have gone away and every laptop on the market would be running an emulator that functions as a start-up program on the embedded firmware. Nothing can ever be infected anymore because a few key vendors would have got together to actually use the trusted modules inside technology. There would also be no more embedded passwords in IoT devices. Every vendor would have removed default passwords and people would be used to physically touching most devices to display the password. Also decrypted Internet traffic will make anti-virus software irrelevant.

Dr R.K. Thomas, a highly commended former Naval Commander has spent his lifetime in the pursuit of frontier technology. An avid aviator, he was educated from the best of institutions across the globe which includes Stanford University (USA), Kent State University (USA) and IIT Delhi. He has obtained Doctorate in the niche areas of Computer Science, Network Security and Alternative Medicine with a Fellowship in Corporate Social Responsibility from New York. He has the unique distinction in conceptualizing and developing niche projects in the Indian Navy including Naval Intranet in the year 1998, Navy-wide enterprise E-Learning in the year 2004, Malware Analysis Lab in the year 2008, securing Naval networks and in Tempest. He also has worked at the highest echelons in Network security in India including with the NSA, DRDO.