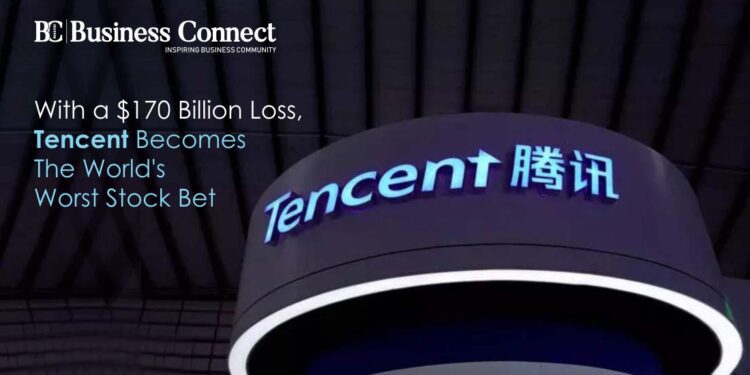 Tencent Holdings Ltd. has gone from being a market favourite to the world’s largest stock loss this month as a result of China’ extraordinary crackdown on its technology industry.

As of Wednesday (28th July), the Chinese Internet behemoth has fallen 23% in July, putting it on track to have its worst month ever after losing roughly $170 billion in market value. According to Bloomberg statistics, this is the quickest evaporation of shareholder value in the globe over this time period. Chinese firms, notably Meituan and Alibaba Group Holding Ltd, account for nine of the top ten losses in shareholder value this month.

Tencent’s stock rose 7.1 percent on Thursday (29th July) morning, mirroring broader advances in Chinese markets, as Beijing stepped up its attempts to assuage worries over its assault on the private education sector.

The Shenzhen-based company is one of the main targets of an official campaign aimed at some of China’s digital behemoths thought to pose a significant threat to the country’s data security and financial stability. The stock market’s decline accelerated earlier this week when Beijing expanded its regulatory crackdown to include formerly high-flying businesses like private education.

“I don’t see the regulatory crackdown coming to an end anytime soon. In the next few years, policymakers will place a high premium on data security. According to Paul Pong, managing director of Pegasus Fund Managers Ltd, “it’s a new normal.” “Valuations will have to adapt to account for this, particularly for technological behemoths like Tencent.”

Tencent has faced penalties such as the loss of exclusive music streaming rights and antitrust fines as a result of the regulatory storm. This week, the business said that new user registration for its popular WeChat services had been suspended and that it had been forced to remedy mobile app-related concerns.

Despite fears of future regulatory action, the company’s stock is starting to seem cheap, and most analysts have refrained from lowering their price targets: Tencent is still recommended as a “buy” by 62 of the 68 analysts who have a rating on the company. According to Bloomberg statistics, analysts’ average target price is HK$736.3, a 65 percent premium over Wednesday’s finish of HK$447.2.

“Tencent trading at HK$500 is appealing, but the next earnings will be an important item to watch,” Pong said, adding that if the company can achieve 20% -30% growth, its shares may see a strong comeback. “Because it would demonstrate that they can still be profitable in this difficult environment.”

Any significant share repurchase by the firm, according to Citigroup analysts such as Alicia Yap, may potentially assist the company to reverse the present negative investor sentiment.

In a research note, Yap and her colleagues wrote, “We think that if large Internet businesses announce new share repurchase plans or raise the number of current buybacks, it will reflect management’s confidence in fundamentals and comfort investors on the profit growth outlook.” The stock has a ‘buy’ recommendation from Yap.