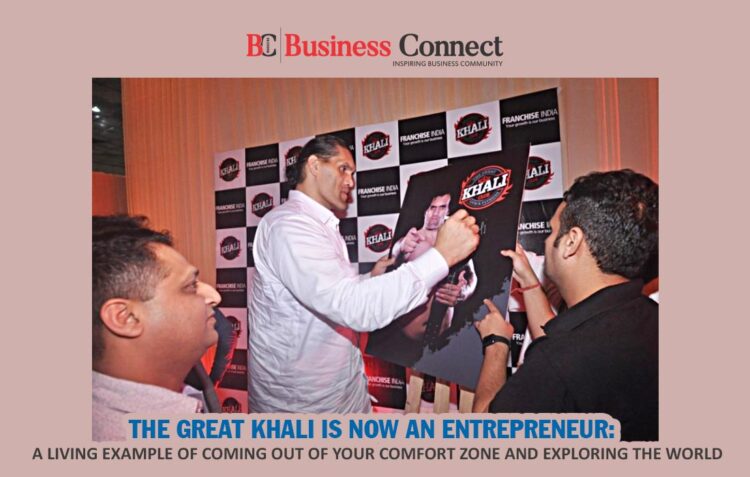 The Great Khali Is Now An Entrepreneur: A living example of coming out of your comfort zone and exploring the world

It was 7th of April, 2006. A wrestling smackdown was on between the world’s heaviest man ‘Mark Henry’ and the deadman ‘The Undertaker’. The latter was merciless on the former. This was the time when a seven feet tall giant from India, the great Khali as they later named him, entered the arena and bashed down ‘The Undertaker’ to become an overnight sensation. He thus became the first Indian to sign a world wrestling entertainment (WWE) contract, which made WWE even more popular in India and inspired many young adults to take up wrestling as a profession.

From his illustrious career in WWE, where he won the world heavyweight championship, The great Khali has now turned into an entrepreneur by partnering himself with Franchise India. He has stepped into the fitness industry with the launch of ‘The Great Khali Gym and Fitness Club’. The club aims to promote healthy living through right exercises, yoga, Zumba and much more. This is not only for the die hard wrestlers but welcomes every individual from all gender, who aim to remain fit. With an interesting feature, the club also teaches safety techniques to women. The vision is to take this forward across the entire nation.

Khali was born in a poor family and had to do odd jobs to serve his family. He had worked as unskilled labour in his hometown Himachal. He later worked as a security guard in Shimla. With his grit and perseverance, he joined Punjab police. With his willpower and self-reliance, he entered into the field of wrestling and participated in New Japan Pro Wrestling. With his strength of will and character, he represented India for World Wrestling Entertainment. His fame, popularity, and toughness has offered him roles in several Hollywood/Bollywood movies and TV shows. Khali’s attitude towards life is a right example of coming out of your comfort zone and trying out new things in life.