The Subtle Scream of the Glitches in the Indian Judiciary System 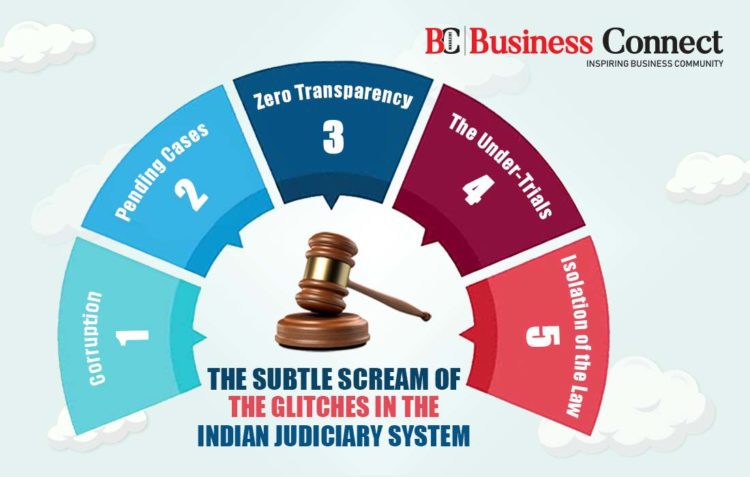 One of the oldest legal systems in the world, the Indian Judiciary System is still highly influenced by the features of the British law that were incorporated centuries ago while India was still under the colonial rule.

The framework provided by the supreme law of the country, the Indian constitution and the judicial system flaunt a history of the glorious independence era. It abides by the common law system that couples with regulatory and statutory laws. We also follow the adversarial system which happens to be of high importance for its unbiased perspective to present both sides of the story to present neutral to the judge, who further proved the judgment based on the evidence provided and the arguments made.

But like every system with amendments, the Indian Judicial Systems comes with its own set of flaws that reflects upon its weaknesses and defects and should immediately be reformed and accountable. Here are a few major problems that are faced;

Corruption is deep-rooted in a lot of institutions of the government in India and so is in the legal as well. The number of scams, rapes, murders, and atrocities that take place have highly put the legal system, judiciary, functioning process, ignorance to truth, in a negative light. The culpability is under the constant scanner, there have been cases of bribes being given to a number of high profile lawyers, judges etc. there is a dire need for immediate repairing of this culture.

With the maximum number of backlog cases in the world, Indian Judicial system is running on an all-time slow with close to approximately 30 million cases. And there is no end to the constant rise of this number, the need for more judges has been discussed a lot of times but hardly much is done about the same, implementation is either insufficient or late. And while the rich can get away with tapping on expensive lawyers, it’s the mass of poor that mostly suffers the wrath. The slow pace not just delays the justice, it also keeps the prisoners awaiting in the prisons for their trials, eventually with a number of innocents spending their life behind the bars. For instance, the financial hub of India, Mumbai’s industrial development has been suffering immensely due to the pending land dispute cases for years.

Lack of transparency is another great barrier that holds back the better of the judicial system. Over time we have come to understand that Right to Information (RTI) act has not proven to be enough organized and hence the issues like trust on law, quality, and liability of justice keep popping up among the citizens.

The number of prisoners on under-trials is very high in India and these prisoners end up spending their entire lives in the prison waiting for their cases to come to some definite conclusion. And while at it, the agony and suffering of staying back in the prison defending themselves are far more than the actual time of sentence. These prisoners are not proven guilty unless they are convicted by the courts. On the other hand, the rich and influential people can fetch the police at the back, and they can pester or hush troublesome and the unfortunate, throughout the long trials in the courts.

It is of utmost importance that the judicial system of a country should be of paramount essentiality and an integral part of the society. It should as well ensure that participation and communications are of the relevance of the society. There are a number of countries out there that encourage participation of the citizens for a better outlook, but on the contrary in India, there is no such activity followed, which again is something that is derived from the colonial rule times.  There is a need for change after more than 60 years of independence for the officers to come on common grounds with the people.

In spite of the advancements technologically and otherwise that has dramatically impacted the lives of the commoners in positive ways, the legal system of India still looks like carrying its shady past and subtly shouts for a change in its actions and ways.

No matter how hard we shout of being a developing nation, the fact remains that the judicial system is out of place and need an immediate tuning with more case sensitive democratic norms and procedures that validate each and every section of the society and not just the posh. The faster we structure the judicial system the better and immediate progressive bend will intercourse the society.

Holi – Binding India in the Colours of Love and Unity