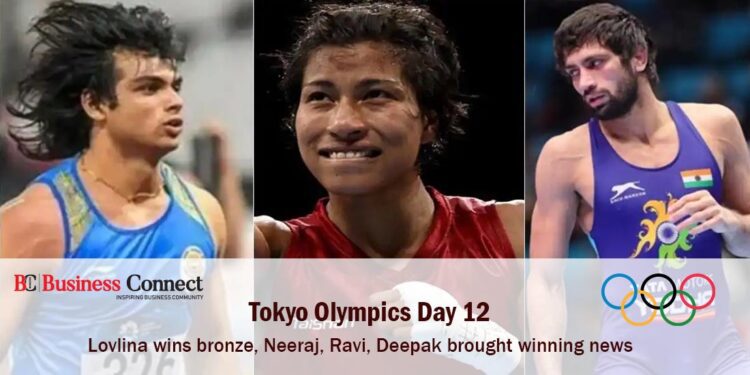 After losing 5-0 in the 69kg semi-finals against defending world champion Busenaz Sürmeneli of Turkey, Lovlina Borgohain took bronze in the women’s welterweight division. Hers is India’s third medal in the current Tokyo Olympics, even though she was defeated, Lovlina became India’s second woman boxer with an Olympic medal after Mary Kom in the 2012 London Games.

Ravi got out to a terrific start, scoring two points, but the Colombian battled back and attempted to pin Dahiya. The Indian wrestler, however, won the first period 3-2. Dahiya overpowered the Colombian throughout the second session, scoring back-to-back points to win the match 13-2.

The Indian wrestler will now face Vangelov Georgi Valentinov of Bulgaria, who defeated his opponent 11-0 by not allowing him to a single point.

With a remarkable throw of 86.65m, Neeraj Chopra, a javelin thrower, gained a straight qualifying spot for the finals, placing top in Group A. Chopra, 23, who is competing in his first Olympics, just needed a few seconds to go to the final round, which will be conducted on Saturday, after he sent the spear well over the qualification mark of 83.50m on his first try.

Lassi Etelatalo of Finland won a straight qualifying with his 84.50m performance. After his first throw, the 23-year-old Indian walked off the javelin pitch, having comfortably won his spot in the final.

Deepak Punia in the Semi-Finals

At the 2021 Olympics, Deepak Punia staged one of the most dramatic comebacks in history. In the final minute of the second round, the Indian grappler was up 3-1. Soon after, he was brought down by China’s Zushen Lin, making the score level.

If the scores are tied, the wrestler who earned the final point wins the match, according to the rules of freestyle wrestling. Deepak kept attempting to pull off something magical in the quarters, eyeing a possible exit. He pulled off a stunning play with only 10 seconds left in the match, resulting in a 6-3 victory.