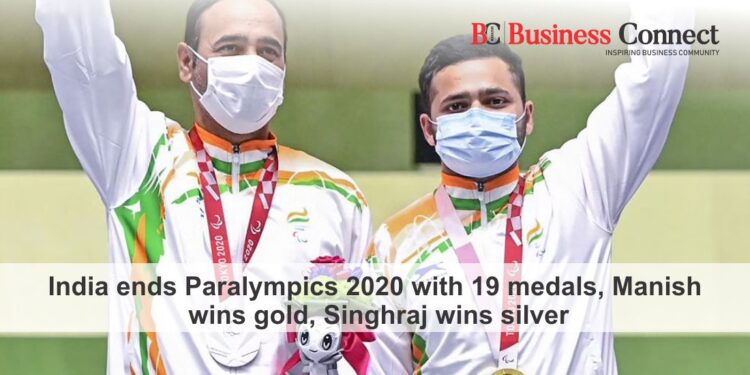 At the Tokyo Paralympic Games 2020, the Indian contingent breaks the record by winning 19 medals, including 5 gold, 8 silver, and 6 bronze. India had won 12 medals in total since its debut appearance at the Paralympics in 1968 till the 2016 tournament in Rio. At the Tokyo Paralympics 2020, the country has already surpassed that total by winning seven medals. India finished 24th in the overall medal tally out of 162 nations, but its 19 medals placed it 20th in terms of total medals.

Manish won the gold medal with a total score of 218.2, a Paralympic record. Singhraj Adana, a member of his Indian squad, came up just short in the final, scoring 216.7.

Earlier in the competition, the two Indian shooters put on a strong performance in the qualification round to get to the final. After six series, Manish scored 533-7x points, while Singhraj scored 536-4x points.

Singhraj, who earned bronze in the P1 men’s 10m air pistol SH1 event on August 31, has now won two medals. After the qualification round, Singhraj placed fourth, while Manish placed seventh. With 507-3x points, another Indian shooter, Akash, was unable to secure a final berth.

At the Tokyo Paralympic Games 2020, Indian shooters have won five medals, including two golds. Competitors in the SH1 category have a disability that affects one arm or leg, such as amputations or spinal cord injuries, so the pistol is handled with only one hand. The mixed 50m air pistol game is categorized as P4. Most shooters participate while sitting, while others compete in standing positions, as required by the rules.

Manish Narwal is a para pistol shooter from India. He is placed fourth in the world in Men’s 10m Air Pistol SH1 according to the World Shooting Para Sports Rankings. Manish is also a beneficiary of the GoSports Foundation’s Para Champions Program. In the year 2020, Manish received The Arjuna Award for Outstanding Performance in Shooting Games.