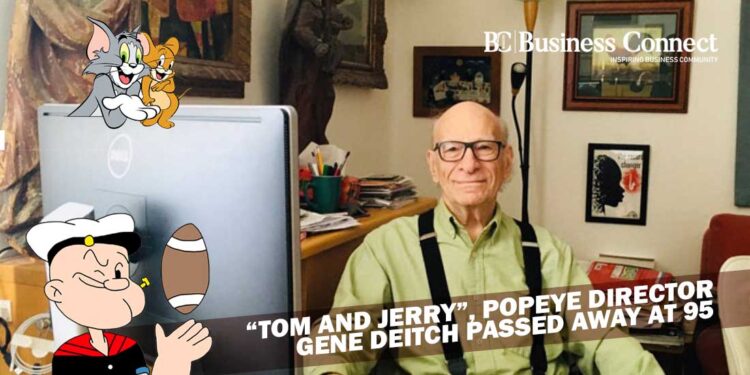 “Tom and Jerry”, Popeye Director Gene Deitch passed away at 95

Eugene Merril Deitch was an American illustrator, animator, comics artist, and Film director who passed away in Prague on Apr 16, 2020, at age 95 due to intestinal problems as per Wikipedia. He directed very famous Cartoon comedy short episodes, including Tom and Jerry, Popeyes the Sailor, Munro, and Nudnik, and Tom Terrific.

Early life
He was born on Aug 8, 1924, in Chicago, the son of salesman Joseph Deitch and Ruth Delson Deitch Later, he and his family moved to Californian where he did schooling. In 1924, he got a graduation degree from Lost Angeles High School. In 1962, he got married with Zdenka Najmanova. He has three sons Kim Deitch, Seth Deitch, and Simon.

Early career
After graduation, he started his career with North America Aviation, where he used to draw aircraft blueprints. According to Wikipedia, the Record charger from 1940 to 1951 he contributed covers and interior art the Jazz magazine.

Animation career
In 1955, he started working with Animation studio United Production of America as an apprentice. Later, he becomes creative director of Terrytoons, during the time he created so many charters like Gaston le Crayon, Tom Terrific, and Clint Cobber. While working at UPA (United Production of America), he wrote a drew comic book called “The Real-Great Adventure of Terr’ble Thompson”. In Aug 1958, he got fired from the Terrytoons, later he set up his own studio known as Gene Deitch Associates Inc.

Form 1960 to 1963, Gene and Rembrandt directed Popeye cartoons for TV with King Features.

Award & Achievements
Over his career, Gene Deitch has several nominations and awards for his work as an animator, film-maker, and illustrator. Here I have made some achievements.