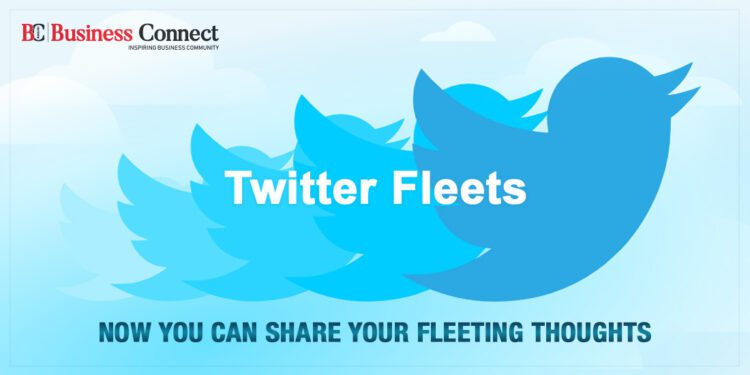 The social network is testing a new feature on Twitter called ‘Fleets’ that enables the posts to disappear after 24 hours. This is unlike normal tweets; Fleets will not receive any retweets, likes or public replies. It will only be getting reactions or responses through direct messages. Now, this seems similar to Instagram’s stories feature. It is almost the same feature that twitter is adopting.

Fleets are considered to be a way to share an individual’s fleeting thoughts. Fleets are not going to be appeared on people’s Twitter timeline, the way a regular tweet does. Instead, they can only be viewed by tapping on the avatar of a person and you can only respond to that fleet through DMs.

The news was announced by Kayvon Beykpour, product lead at Twitter saying, “People often tell us that they don’t feel comfortable Tweeting because Tweets can be seen and replied to by anybody, feel permanent and performative (how many Likes & Retweets will this get!?)”

“We’re hoping that Fleets can help people share the fleeting thoughts that they would have been unlikely to Tweet,” he added.

Though, for many people, the inability to retweet, like or reply will definitely limit a post’s potential reach. But it could be still widely seen, especially when it comes to the users with a large amount of following.

After the twitter ‘fleets’ news came into light, people are giving multiple reactions to it. Users are trending #RIPTwitter saying that this feature will kill twitter. The new function in twitter scares the users that people now onwards will use twitter to upload their pictures and Tiktok videos on stories as they do on Instagram and Facebook.

Social networks are coming up with such functions to encourage users to feel more comfortable sharing.