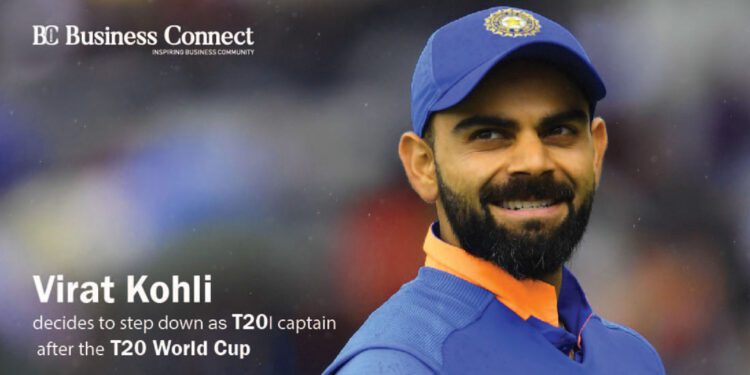 On the 16th of September, Virat Kohli announced on social media that he will step down as captain of the Indian T20 team following the end of the ICC T20 World Cup, which will take place in the UAE and Oman next month. In Test and One-Day International matches, he will serve as captain to India.

Kohli announced his decision to step down as T20 captaincy in a statement posted on his social media pages, saying, I have decided to withdraw as the T20 captain after T20 World Cup in October.

For a long time, there has been speculation regarding Kohli’s future as a white-ball captain, particularly in light of Rohit Sharma’s five IPL victories with the Mumbai Indians.

Knowing your workload is crucial, and given my massive workload over the last 8-9 years playing all three formats and captaining regularly for the last five to six years, I’m well aware, In a statement on his Twitter page, Kohli stated, I feel I need to offer myself space to be completely qualified to lead the Indian side in Test and ODI cricket. He went on to say, during my entire career as T20 captain, I have given everything to the squad, so I will try to do so as a batsman for the T20 team moving ahead.

After MS Dhoni resigned as captain in the limited-overs tournament in 2017, Kohli took over as captain. For the first time, Kohli will captain India in the T20 World Cup. He has previously led the team to the ICC Champions Trophy final in 2017 and the ICC World Cup semi-final in 2019.

Virat Kohli has been under criticism for his captaincy, particularly in the limited-overs format. The primary reason for this is that he has never been able to win a major championship. Although Virat Kohli has led Team India to unprecedented heights in international cricket, his captaincy has culminated in his losing three ICC tournaments.

Top 10 Schools in Delhi 2022, list of best schools for your child

Top 10 Schools in Delhi 2022, list of best schools for your child