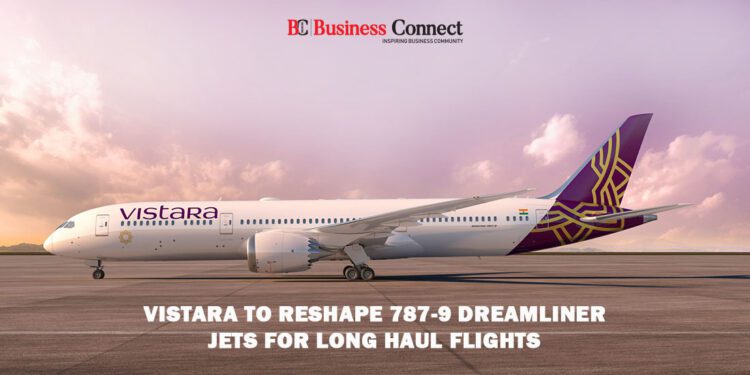 Vistara is in talks with Boeing Co. about upgrading the 787-9 Dreamliner jets it plans to implement over the next two years by introducing a crew relaxation area, enabling the airline to begin direct long-haul flights to the United States and other countries. This was stated by two people with direct knowledge of the matter.

The carrier, a joint venture in the middle of Tata Sons Pvt. Ltd and Singapore Airlines Ltd has received two of six 787-9 Dreamliners so far that it ordered in the year 2018 for operating medium and long-haul international flights. In February 2020, it took delivery of the first plane and the rest are scheduled to join by the year 2023.

Currently, Vistara flies the two wide-body Dreamliners in order to select international destinations, which includes London and on domestic routes. Also, Vistara has an option to order four more 787-9 planes.

“The airline’s new Boeing 787-9 fleet, however, cannot be used for long-distance flights because they do not have provisions for carrying an extra set of pilots,” said one of the two people that is mentioned above, speaking on the condition of secrecy. With rest compartments, the airline would be able to hold an additional set of pilots for direct long-haul flights.

As per the second person mentioned above, Vistara is in talks with Boeing to take in a crew rest compartment in some 787-9 planes it will receive in the coming years, enabling the carrier to begin nonstop flights on long-haul routes.

The person stated that “the Boeing 787-9 is integral to the plan of the airline to fly long-haul.”

Air India Ltd, which is a national carrier, is the only other airline in the country with wide-body planes capable of long-distance flights. Air India has direct flights to Australia and the United States.

According to the website of Boeing, the 787-9 Dreamliner has a flying range of 13,950 kilometres and it has the capacity to accommodate up to 296 passengers in a two-class configuration. Vistara planes have a three-class configuration that contains economy, premium economy and business.

According to a Boeing spokesperson, the company does not comment on customer orders. According to a Vistara spokesperson, the airline is working on fleet plans but “doesn’t have anything to share.” Before international flights from India were halted in March 2020 due to the Covid outbreak, Vistara flew to nearby international destinations such as Singapore, Thailand, Sri Lanka, and the UAE. Under bilateral agreements, the airline currently flies to London as well as the Maldives.

Also Read, Best Places for Destination Wedding in The World.