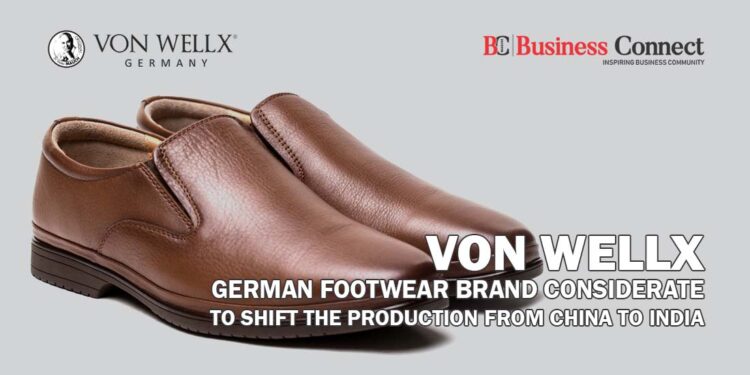 Key Highlights
 Von Wellx is said to be setting up a new manufacturing unit in Uttar Pradesh, India
 The estimated investment to be made on this project is about 110 crore over the next two years
 India is about to evolve as the next manufacturing powerhouse of the world due to the Make In India drive.

The Owner of the Germany-based healthy footwear brand- Von Wellx has decided to shift its manufacturing unit from China to India. As per the claims made by the top officials of the Company, it will relocate its entire shoe production business unit of over three million shoe pairs annually in China to India. The plan is about to be executed by the Owner, Casa Everz Gmbh, through the collaboration with Iatric Industries Pvt Limited alongside the state government of Uttar Pradesh. The Owner claims a total of 18 manufacturing units along with 12 licensees across the globe. The product of the Company is sold in more than 80 countries including Europe as well.

“It is true that after several rounds of conversations, Casa Everz Gmbh has decided to relocate its entire manufacturing unit from China to India. About two years of time horizon is required to reach the maximum capacity after cooperating with the Uttar Pradesh government,” quoted the director of the Iatric Industries
Pvt Ltd and the CEO, Ashish Jain “ India is a better choice over the other locations in the world as the government has offered a lucrative opportunity to easily establish the manufacturing units here. Demographic dividend and availability of the raw materials are also the key points of the consideration.”

The MSME minister of the state, Udan Bahan Singh said that it is a commendable step to see the investment made from the side of Casa Everz Gmbh, as this will offer numerous employment opportunities to many people in India. Von Wellx offers orthopedic footwears to people with numerous health issues. The brand breached India last year and is available across over 500 retail locations as well as on the online platforms. This exclusive partnership will definitely enable the creations of the jobs directly or indirectly.