When water begins to control you: Mumbai and Chennai Upsetting Contrast 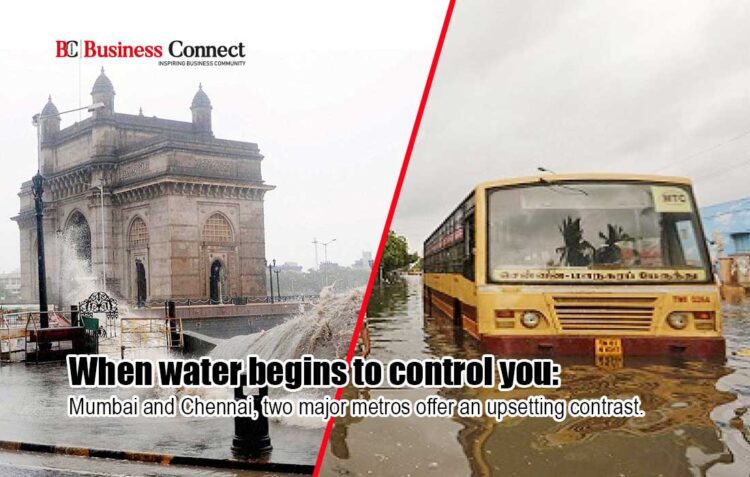 When water begins to control you: Mumbai and Chennai, two major metros offer an upsetting contrast.

There’s mass murder. The tragedy is, it’s not a rare sight. A few will realize how big the dangers are. There are people dying (rather being killed) every day and we have adapted to an inefficient system. One day just like many others, we too will perish and the system will stay as inefficient as it always was. Immature death due to scarcity or abundance of water is unimaginably painful. You and I from our bedroom can’t feel the trauma because there’s accessibility of water in our taps. There’s water to cook, there’s water for bathing and there’s water to waste in festivals too. Surprisingly, we have turned indifferent towards people who die due to the lack of this basic necessity.

The nation knows that Mumbai is going to flood during the monsoon and people will continue to die. Flood won’t see whether it’s a child, woman or a young man. It will take away everything that comes in its way. Days later, their bodies would be found and handed over to their families. It all sounds so common because we have been hearing this story since decades. The city somehow manages to survive it and the citizens take pride in their survival instinct. Is the country so inefficient that it cannot fix this problem? Or is human life so cheap that it doesn’t matter at all? It’s the same age-old story and things don’t seem to be getting better.

On the other hand, Chennai is facing drought-like conditions and is trapped in a severe dry cycle along with other neighboring states. As the climate change worsens, water is shaping up to be a serious risk. Hospitals, heavily rely on water for sanitation. Schools, offices, universities, all need adequate water in their toilets. Life has come to a standstill. Drought struck areas are being provided water from far fetched places. The quality of this water is so poor that it has lead people to be admitted in the hospitals. Hospitals are dependent on privately owned water tankers and it’s getting difficult to get water even from 100 kilometers away. If this continues, schools have to be shut down. Growth would be stagnant. Aren’t we heading towards a disaster?

Our cities are poorly planned. There is no water to seep into the ground. Water can’t seep into the ground through cemented floors. Thus, Mumbai gets submerged in water and Chennai faces a water crisis due to the unavailability of adequate groundwater. Rainwater harvesting (RWH) is the crying need. RWH is a simple way to collect and store rainwater and use it in the future. Lakes and ponds not only store water but also maintains the ground level in the surrounding areas.

If the system doesn’t step up to deal with such contrasting disasters, it would continue to intentionally or unintentionally kill its people. Yes, people do have certain responsibilities to bring a change, but the officials who are specifically hired to look after such issues and are paid enormously for coming up with a solution should come up with a solution. The system has no right to take away a basic right ‘A Right to live’ from anyone. So far, an inefficient system has been murdering people, every day.