WHO Clarifies: Does Not Identify Viruses on Variants with Names of Countries 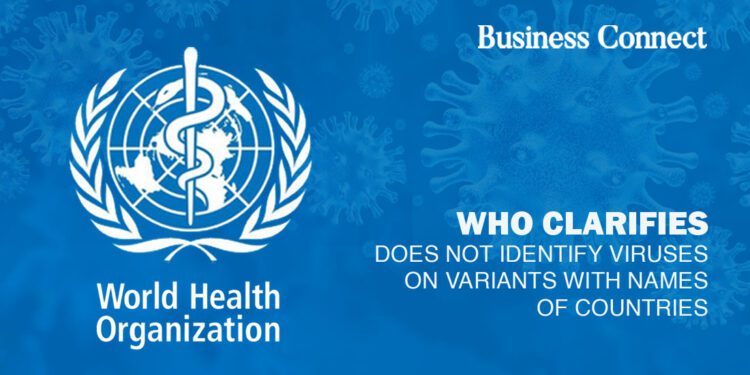 WHO Clarifies: Does Not Identify Viruses on Variants with Names of Countries

The World Health Organization (WHO) clarified on Wednesday (12th May) that it does not mark viruses or variants with the names of countries where they are first identified after B.1.617 was referred to as an “Indian Variant” by many media reports.

The United Nations’ health organisation instructed all to refer to the variations by their scientific names.

“Viruses, as well as variants, are not linked in any way with the names of the countries where they were first detected,” according to the World Health Organization. We refer to them by their scientific names, and we ask that everyone do so for consistency’s sake,” WHO South-East Asia tweeted.

The WHO’s clarification comes after the Indian government stated that the word “Indian Variant” was not correlated with the B.1.617 variant, which was first discovered in India, in the WHO’s weekly pandemic epidemiological update.

“This is to understand why WHO does not equate the term “Indian Variant” with the coronavirus variant B.1.617 in its 32-page article. In reality, the term “Indian” was not used in its official report,” In a statement, the Indian government said.

It went on to say that the news of the WHO classifying B.1.617 as a variant of global concern had been covered in many media reports.

“The coronavirus strain B.1.617 has been labelled as an “Indian Variant” in some of these studies. These media reports are based on nothing and are untrue.”

The B.1.617 version of Covid-19 was discovered in sequences uploaded “from 44 countries in all six WHO regions,” according to a WHO study released earlier today.

“As of the 11th of May, over 4,500 sequences from 44 countries across all six WHO regions had been sent to GISAID, an influenza data exchange forum, and assigned to B.1.617, and WHO has received reports of detections from five additional countries,” WHO said in its weekly pandemic epidemiological update.

According to the WHO survey, “reports of detections from five additional countries” have been issued.