How not to get scammed while traveling abroad 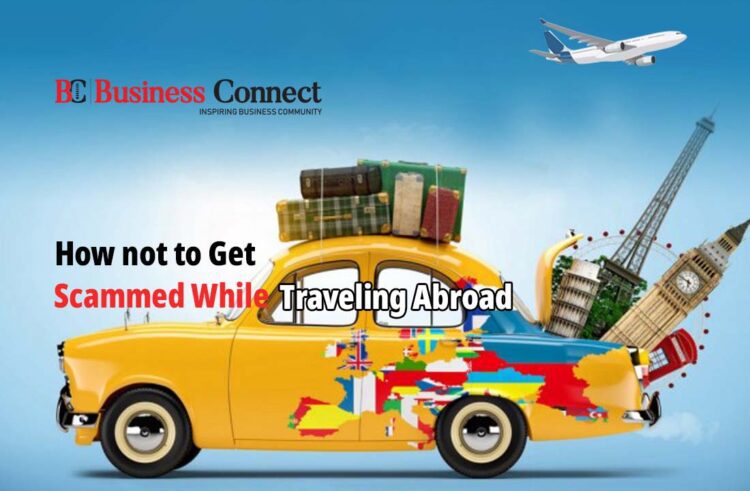 how not to get scammed while Traveling Abroad- Business Connect

How not to get scammed while traveling abroad: Learn the tricks of the trade and avoid becoming prey

An increasing number of tourists are becoming easy targets for the team of professional scammers and fraudsters. Business Connect shares some of the ways you can be tricked and how you can avoid them.

Situation 1: You take a taxi to a hotel and the taxi driver puts off his meter saying either it is out of order or calling it as a holiday or making some other excuse. For a few minutes of travel, that would normally cost something around 2 to 5 euros, he charges a lot. Since you believed that he was a legitimate taxi driver you won’t argue, plus you are not used to the local currency and didn’t do the math straight away, you paid the fee he was claiming. When you get back to the hotel and did the math or spoke to your hotel staff, you realize that you got scammed

How to avoid: Do your Google map search to get a rough idea of the distance and fare. Talk to the locals before hiring a cab. Prefer using public transport. A good way to go ahead is to get the contact number of the hotel staff and talk to him directly.

Situation 2: A person asks if you have dropped a ring and shows you the ring lying next to you. He also shows the hallmark. If you say no to the offer, he offers you to buy it at half the price as he is in real need for money. A lot of people get attracted towards the offer and end of buying thinking it’s a win-win situation. You walk a little and notice that the owner of the ring approaches you asking for the ring describing every detail of the ring and threatening to call the police for not handling the same.

How to avoid: Do not buy expensive stuff from roadside buyers. Be mindful that your tourist tag is a center of attraction and thus, you should be careful.

Situation 3: In this scam, a stranger approaches you in a friendly way and places a bracelet around your wrist and demands money. If you refuse to give it, they will begin to create a scene. People generally give money and avoid embarrassment.

How to avoid: Never allow anyone to place anything on your body. If they insist, be firm and return their objects to them and walk away.

Situation 4: This is again a very common and popular trick among scammers. Someone spills something on you. It may all look as if it was a mere accident. They may sound apologetic and offer to clean your stain. While all this event is on, someone from the team may be pickpocketing you. Before you realize, the damage has been done.

How to avoid: If someone spills something and offers to clean, firmly ask them not to clean and that you can do it yourself. Take care of your belongings and step to a safer place to clean your stuff.

Situation 5: Such scammers offer a heavy discount on designer clothes. You are lured by the discount and end up buying duplicate stuff rather than what you have chosen. The store packs it so quickly and packs it in a way that you don’t even realize that the packed item is duplicate stuff.

How to avoid: To avoid this scam, remember that designer clothes are never offered cheap. Also, before leaving the store, ensure that you get the exact item you asked for.

Situation 6: A stranger will approach you saying that something is on your back. You will notice that there’s actually something. While you take out your backpack, camera, etc. to clean the stuff, the thief will take your materials away before you notice.

How to avoid: If someone tells you that you have something on your back, avoid such well-wishers and keep walking. When you find a safe place, remove the unwanted stuff.

Situation 7:  You will come across friendly strangers who often are very curious to interact with you saying that they are so keen to know more about your country. After a while, they’ll escort you to a nearby art or jewelry shop and insist you buy. You feel obligated to be nice to your new friend and end up paying for something which you could have avoided.

How to avoid: Say thanks for the company and deny firmly saying you are not interested in purchasing as of now and walk away.

Your mindfulness is what makes you smart. Be alert while you still enjoy the stay.