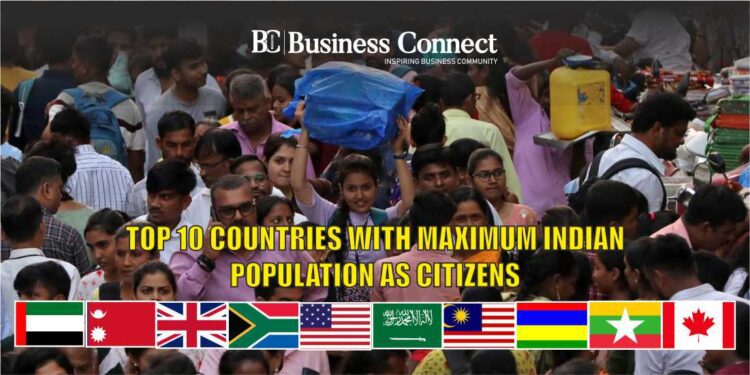 Working abroad is not only a great experience, but it can also launch your international career and open doors to new opportunities around the world. Sometimes going abroad takes that pressure off and gives you the freedom to live by your own rules.

Today, Indians are spread everywhere in the world. About 150 years ago, Indians started moving outwards in search of opportunities. Now more than 44 lakh Indians live in America alone. This is the largest number of Indians in any country outside India. But their population is increasing in other countries of the world as well, which you can easily understand from the statistics given below.

Nepal, formerly the Federal Democratic Republic of Nepal, is a landlocked country in South Asia. 81.3 percent of the citizens of Nepal are Hindus. According to reports, Nepal is the most religious Hindu-majority country in the world, with most of the important Hindu pilgrimage centers concentrated in this country.

Around 6,00,000 Indians are living/domiciled in Nepal. These include traders and businessmen who have been living in Nepal for a long time, professionals (doctors, engineers, IT personnel), and laborers (including seasonal/migratory in the construction sector). There is a big number of Marwadi in Nepal businesses. In 2001, it was estimated that about 4 million Indians had migrated to Nepal in the last 35 to 40 years.

4 million NRIs in Nepal comprise 14.7% population of the country.

The most powerful economic and military power in the world is a North American country called the United States of America. Its popular culture, as represented in music, film, and television, has a significant global influence on culture.

A report published by the Ministry of External Affairs in 2018 revealed that there are 4 million plus (roughly 1.4 percent of the total population) Indians residing in the United States.

The Approx population of Indians in the United States as of 2021 is 45 Lakhs.

According to the latest reports, the majority of expats in Saudi Arabia are Indians, who make up between 10 and 13 percent of the country’s total population. There are 28–30 lakh Indians living in Saudi Arabia as of 2021.

Malaysia is a nation in Southeast Asia that has territory on both the island of Borneo and the Malay Peninsula. It is known for its beaches, and rainforests and for its mix of Malay, Chinese, Indian, and European cultural influences.

According to the 2018 report published by the Ministry of External Affairs report, there are 2,987,950 (29.88 Lakhs) Indians residing in Malaysia.

The United Arab Emirates, or simply the Emirates, is a country in Western Asia. The United Arab Emirates has seen a significant increase in the population of Indians here due to the growing opportunities in petroleum, finance, and other industries. The most important part of the country’s community is 40% of Indian expatriates. There are over 3 million Indian expatriates living in the nation.

The United Kingdom, also called the U.K. or Britain, consists of a group of islands off the northwest coast of Europe. These include England, Scotland, Wales, and Northern Ireland. The name Britain is sometimes used to refer to the United Kingdom as a whole. Soccer, rugby, cricket, boxing, and golf were all invented in Britain.

According to the Ministry of External Affairs report, there are 1,764,000 Indians residing in the United Kingdom.

South Africa, the southernmost country on the African continent, is renowned for its varied topography, great natural beauty, and cultural diversity, all of which have made the country a favorite destination for travelers.

Before 1981, South Africa has a long history of giving power to many big countries involved in the culture of slavery in order to fulfill the development which reflects even today in African countries mainly in Mauritania and Burundi. Despite the poverty in many countries of Africa still it provides business opportunities to businessmen. You will be surprised that Indian companies from Airtel to TVS are making huge profits by selling their products in African countries.

According to the Ministry of External Affairs report, there are 1,560,000 (15.60 Lakhs) Indians residing in South Africa.

Today Indians make up about 2.5% of South Africa’s population and have contributed not only to the country’s diversity but also to the economy.

Canada is a country in North America consisting of ten provinces and three union territories. Canada is often at the top of the list of the best countries to live in. Indians move to Canada even though the cost of living in Canada is high. Because it is not just about financial differences but many other quality factors like top universities, better job opportunities, the standard of living, free health facilities, access to the international market, etc.

Myanmar (formerly Burma) is a Southeast Asian nation of more than 100 ethnic groups, bordering India, Bangladesh, China, Laos, and Thailand. Its old English name was Burma, which was named after the Burmese, the most populous caste here. Its capital is Naypyitaw and the largest city is Yangon formerly known as Rangoon.

India and Myanmar signed a treaty of friendship in 1951. Prime Minister Rajiv Gandhi’s visit in 1987 laid the foundation for strong ties between India and Myanmar. Several agreements have been signed to enhance bilateral cooperation between the two countries which are still beneficial to both countries.

According to a 2018 report by the Ministry of External Affairs, there are about 2,000,000 (2 million) Persons of Indian Origin (PIO) in Myanmar and 9207 Non-Resident Indians (NRIs) in Myanmar. Some of the Cities where Indians are in large numbers are Yangon (Rangoon), Mandalay, Pyin U Lwin, and Kalaw

Mauritius, an Indian Ocean island nation, is known for its beaches, lagoons, and reefs. The island was more or less successfully occupied by the Dutch, French, and British before gaining independence in 1968. A beautiful country like Mauritius is often compared to heaven on earth because of the calmness and the view of the blue sea here that mesmerizes people.

According to the Ministry of External Affairs, there are 894,500 (8.94 Lakhs) Indians residing in Mauritius.

Let us tell you that about 70% of the population of Mauritius is Indian. Here Indians get jobs easily by looking at their skills. Also, it is not very expensive to live here.

01. Which country has the most Indian population?

The top 10 Countries with the Maximum Percentage of Indian Population are as follows: –

02. Which are the top 5 Countries with the most Indians?

The top 5 Countries with the most Indian residents are as follows: –

03. Which are the top 10 poorest countries in the world?

The 10 Poorest Countries in the World (based on their 2020 GNI per capita in current US$) are as follows: –

04. Which are the top 10 richest countries in the world?

The Top 10 Richest Countries in the World (by GDP per Capita, current prices US$ – World Bank) are as follows: –