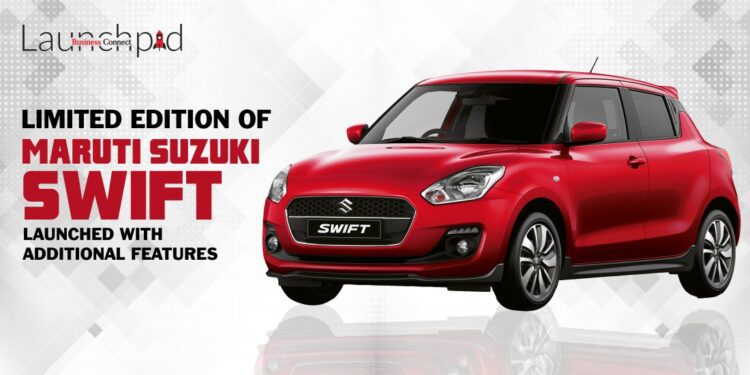 On Monday, Maruti Suzuki launched Swift Limited Edition at an additional cost of Rs 24,000 over and above the vehicle price ahead of the festive season. Swift Limited Edition-offered in all models and its aims to target potential consumers with its exclusive styling signs on the exterior and cosmetic additions in the cabin.

All New Maruti Suzuki Swift’s Limited Edition aims to establish a distinct and exclusive appearance on the road, one that is distinct from even the regular Swift. As such, the special version uses an all-black design palette and receives, apart from an aerodynamic spoiler and hull-side moulding, a sleek black body kit, all-black garnish on the hood, tail lamp and fog light. The exclusive version on the inside benefits from sporty seat covers that support the already existing circular dials and flat-bottom steering wheel.

Maruti Suzuki Swift has been on Indian roads for around 14 years and has been a primary Maruti Suzuki brand and a good one. By making it an even more sporty appeal, the company is now looking at further strengthening the success of the car. This Limited Edition provides a new way to portray their personality in a trendy, sporty and youthful way for all Swift enthusiasts and fans, “said Shashank Srivastava, Marketing and Sales Executive Director, Maruti Suzuki India Limited.” Swift has been one of the best performers in our portfolio since its launch, with its disruptive looks and peppy results, and has helped us boost leadership in the premium hatchback segment.”

Maruti Suzuki estimates that since Swift was the first launch in the country, more than 23 lakh vehicle units have been delivered. Over the past few years, the three-time Indian Car of the Year (ICOTY) award has succeeded in cementing its position among the top-selling passenger vehicles in the region.