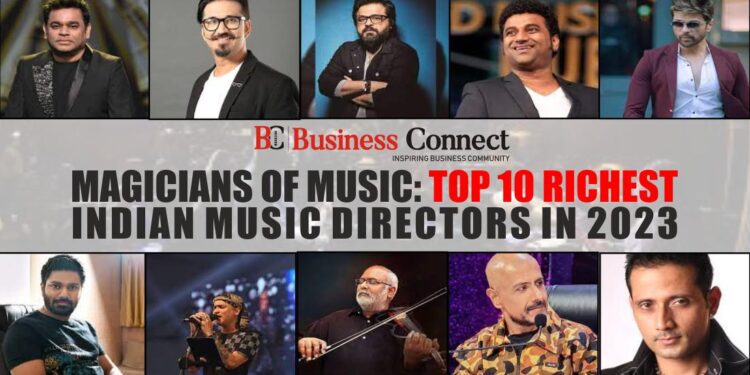 Our life is incomplete without music. Music is the best way to express feelings. We are slaves to the songs as well as the instruments. Whether it is the fickle beat of the Tabla (a small drum or pair of drums) or the mesmerizing flutes, the straight-to-heart chords of the Sitar, or the artistry done on the harmonium, we always remember something or the other.

But what about the magician behind the creation, who used various patterns and tricks to mold our emotions on a hidden scale? Today, we are going to meet the top 10 richest and most popular Indian music directors in 2023, let’s start the list with Mozart of Madras.

AR Rahman is an Indian musician, singer, songwriter, music producer, composer, multi-instrumentalist, and philanthropist. Time magazine dubbed him the “Mozart of Madras” and named him one of the 100 most influential people in the world in 2009.

Pritam Chakraborty, popularly known as Pritam, is a popular Indian music director, composer, singer, instrumentalist, and record producer for Bollywood films, currently based in Mumbai. In a career spanning nearly a decade and a half, Pritam has composed music for over a hundred Bollywood films. The total net worth of Pritam Chakraborty is Rs.147 Crore.

In the year 2009, he got immense fame for giving music in ‘Dev D’ and he also received the National Award for ‘Best Composer’ of 2010. Amit Trivedi is one of the richest Composers in India. According to reports, Amit Trivedi’s net worth is $5 Million.

Devi Sri Prasad is a music director, playback singer, and lyricist in Telugu and Tamil cinema. His music has been remade in many other languages ​​apart from Tamil and Telugu. His films have stars like Mohanlal, Amitabh Bachchan, and Surya Shivkumar in the lead roles.

Between 1999 and 2015, he composed music for over 80 Bollywood films. In 2013, he won his 5th Filmfare Award for Best Music Director for his work in the Telugu film Atharintiki Daredi. His net worth has increased significantly in 2021-2022. As of December 2022, Devi Sri Prasad has a net worth of $5 million.

Himesh’s career took off when he sang the song Aashiq Banaya Aapne, which was a huge success and won him the Filmfare Award for Best Playback Singer, among other accolades. Most of his earnings come from Bollywood movies and songs; His per film fee is between 3 to 4 crores. The total estimated net worth of Himesh Reshammiya is 10 Million USD which in Indian currency is about INR 73 Crore.

Mithun is an Indian music composer, singer, and songwriter. He rose to prominence in 2013 when his song “Tum Hi Ho” from the Bollywood romantic film Aashiqui 2 became a chartbuster hit and won him the Best Music Director Award by Filmfare.

He wrote and composed “Sanam Re”, one of the most viewed Hindi songs on YouTube. The song was awarded the “Most Streamed Song of 2016” award at the Global Indian Music Academy Awards. Mithun’s net worth as of December 2022 is $5 million.

Zubin Garg is an Indian famous and biggest singer, actor, composer, and lyricist from Assam. Zubin has also sung in Assamese, Hindi, Bengali, Kannada, Oriya, Tamil, Telugu, Punjabi, Nepali, Marathi, and Malayalam films. He is from Jorhat in Assam. Zubin Garg is considered a rockstar in Assam and West Bengal.

Zubin’s first Assamese album “Anamika” was released in 1992. He got his biggest break in Bollywood from the film Gangster where he sang the song “Ya Ali”. The song won him the Best Playback Singer at the Global Indian Film Awards (GIFA) in 2006. The Net worth of Zubeen Garg is 5-9 Million USD.

Koduri Markathmani Keeravani, popularly known as MM Keeravani. He was born on 04 July 1961 in Andhra Pradesh. He is a Tamil, Telugu, and Kannada film music director, film scorer, and composer. He composed the music for the film Baahubali 2: The Conclusion, which was a worldwide theatrical hit. The net worth of MM Keeravani is estimated to be $1 Million – $6 Million.

Vishal Dadlani is an Indian singer, music record producer, and songwriter. Till now Vishal Dadlani has sung around 300 to 400 songs. Vishal Dadlani’s net worth is generated from his contracts for various songs and films in Bollywood. He partnered with Shekhar and both have given many Bollywood hits.

Dadlani has also appeared as a judge on several singing reality television shows such as Sa Re Ga Ma Pa Challenge 2007, Jo Jeeta Wohi Superstar, Sa Re Ga Ma Pa Singing Superstar, and Indian Idol Junior. In 2022, he was once again seen as a judge in Indian Idol 13 along with Himesh Reshammiya and Neha Kakkar. The estimated net worth of Vishal Dadlani in 2023 is around $9 million.

Meet Brothers is a Hindi film music director duo. Together they have given music for many Bollywood films. The pair consists of Manmeet Singh and Harmeet Singh. Earlier it also included Anjan Bhattacharya and they were called Meet Brothers Anjan but in 2015 Bhattacharya parted ways with the duo and started her own.

Together the three have given hit music in many films. In 2014, the song Babydoll composed by them, which was picturized on Sunny Leone, became very famous and a hit. According to the report, the net worth of Meet Bros is expected to be 5 to 10 million dollars.

The top 10 Indian music directors are as follows: –

03. Who are the top 10 music directors worldwide?

The top 10 music directors worldwide are as follows: –

The top 10 richest singers in India are as follows: –

The top 10 richest singers in the world are as follows: –

06. Which are the top music companies in India?

The top Music Companies in India are as follows: –

Mukesh Ambani – Person of the Month

Mukesh Ambani - Person of the Month