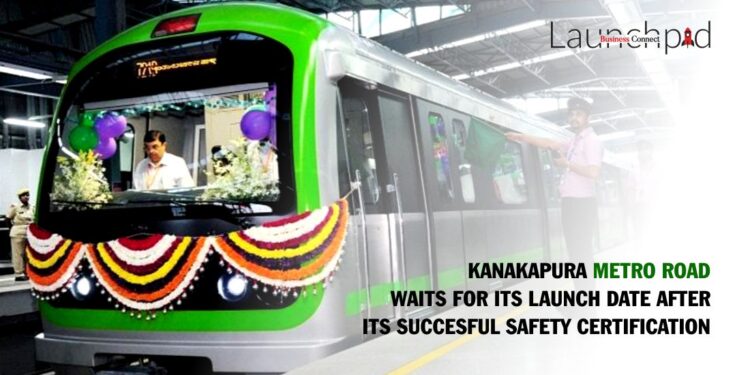 The Kanakapura Road Metro (Yelachenahalli to Anjanapura) section is finally on track. On 23rd, the Commissioner of Metro Railway Safety had permitted to extend the existing (Nagasandra to Yelachenahalli) Green Line.

Under Namma Metro’s Phase 2, this is the first corridor that is going to be opened, which was sanctioned in the year 2014. The launch date is yet to be finalized by BMRCL but it is expected to open by the end of this month or by the first week of December. Once the Kanakapura metro comes on track, the passengers will be able to travel in just 10 minutes for ₹20 between Anjanapura and Yelachenahalli.

The officials of BMRCL stated that as soon as they receive the dates from Chief Minister BS Yediyurappa and Union Minister of Housing and Urban Affairs Hardeep Singh Puri, they will start commercial operations.

On November 18-19, the section was inspected by Abai Kumar Rai, the Commissioner of Railway Safety, Southern Circle (Bengaluru), along with that he conducted speed trials up to 90kmph and 85kmph on down and up lines. Rai stated in his letter that “The opening of BMRCL’s double line is sanctioned and authorized for passengers with 750V DC electric traction at operating speed of up to 80kmph or the speed that is permitted by Automatic Train Protection, whichever is less”.

Several conditions were laid out by Rai in his six-page letter for BMRCL that have to be followed before opening the section. He stated that “Maximum speed should not exceed to 60 kilometres per hour on the platform. Along curves, the theoretical speed should be worked out based on the radius”.

He further stated that “All works concerning to passenger facilities, such as entry/exit, ticketing, automated collection of fares, escalators and elevators, lighting and ventilation, including facilities for senior citizens and other differently-abled people, have been completed and placed into service at all stations. First aid services as well as fire-safety measures should be delivered to all stations.”

He also suggested course-correction steps be taken at stations such as Konanakunte Cross, Vajrahalli, Talaghattapura and Anjanapura.