Chaiti Navratra 2021: Everything You Need to Know to Celebrate Amid COVID 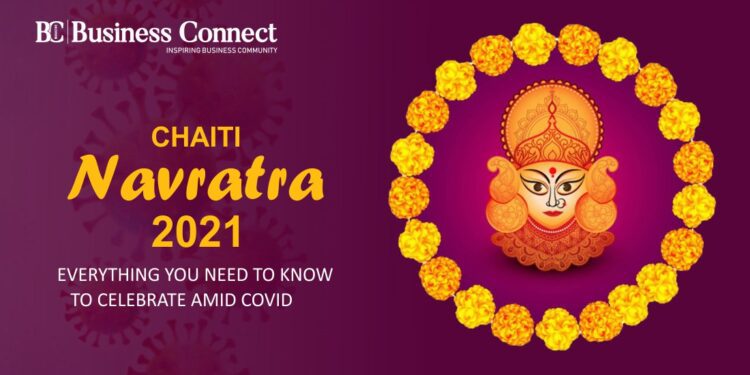 Chaitra Navratri 2021: Everything You Need to Know to Celebrate Amid COVID

Chaitra Navratri is observed every year in India after the spring harvest, which occurs in March or April. This is universally regarded as the best time to buy a home or start a business. According to legend, the goddess protects you from harm and gives you power. This year Chaitra Navratri festival begins on Tuesday, April 13th, and ends on April 22nd,2021. It is a nine-day festival that starts on the Hindu Luni-Solar calendar’s first day. The month of Chaitra (which normally falls between March and April) is the Hindu calendar’s New Year or first month, according to Vikram Samvat.

In Sanskrit, Navratri means “nine nights.” Devotees worship Goddess Shakti in her nine forms for good health and general happiness. The nine forms of Goddess Durga, the auspicious color associated, and the prasad’s offered during puja are:

Shakti means power and Devi Shakti is the cosmic source of unseen energy that maintains and sustains life. Rama Navami, also known as Rama Navratri, falls on April 21, 2021, and is one of the most important days of the festival. The birth anniversary of Lord Rama is celebrated on Rama Navami.

Celebration of Chaiti Navratra in different parts of India

Chaitra Navratri is known by various names in different parts of the world. Gudi Padwa is the first day of Chaitra Navratri in Maharashtra, while Navreh is the first day of Chaitra Navratri in Kashmir. In Punjab, this day is celebrated as Baisakhi, also known as Vaisakhi, which is a festival commemorating the Sikh New Year and the founding of the Khalsa community. It is known as Ugadi in Andhra Pradesh and Karnataka, and Cheti Chand among Sindhis. Kerala celebrates Vishu, while West Bengal and Bihar celebrate Poila Boisakh and Assam celebrates Rongali Bihu. Even though the names vary throughout the country, the festival is celebrated with the same excitement and joy.

The festival commemorates Goddess Durga’s victory over the wicked wild buffalo spirit Mahishasura, Symbolizing the victory of good over evil.

Why do people fast during the Navratri festival?

In many parts of North, West, East, and Central India, people fast for the entire nine days. On the first and last days of the festive season, some people prefer to fast. Fasting is a way of thanking the goddess for what she has done for us. Alcohol and non-vegetarian food are traditionally considered unholy, but there is scientific evidence to back this up. During these fasts, people refrain from consuming meat, wheat, alcohol, onions, garlic, and other foods. According to Ayurveda, these foods should be avoided as they bring negativity during seasonal changes when our bodies’ immunity is lower.

The Navaratri festival allows you to keep your mind relaxed and your body in shape. Kuttu atta, water chestnut flour, fresh vegetables, milk, curd, and makhana are favoured because they are mild on the stomach and easily digestible. Since rock salt is pure and unprocessed, it is used in place of standard salt. If you don’t want to fast, you can eat a vegetarian diet.

Health benefits of fasting in Navratri

During Navratri, everyone is filled with enthusiasm. Fasting in Navratri detoxifies the body due to which the immune system is boosted and blood circulation improves, which maintains the mental level, and removes stress and anxiety.

Drinking plenty of water, juices during fasting prevents dehydration. Many illnesses can be avoided by consuming water.

Fasting in Navratri benefits many people from various diseases like diabetes, cancer, arthritis, etc. Maintaining a healthy routine for nine days of Navratri gets one rid of many diseases. Rising early and worshiping, consuming fruits and healthy food helps to cure many diseases.

Keeping fast during Navratri helps in weight loss and is a boon for the obese. During the fast in Navratri, people avoid eating fried and high-calorie foods and mostly eat fruits. At the time of fasting, in our diet fried potato, sago (sabudana) papad, fasting chips, sweets, and fruits, etc. are prominent.

Must Read:-Ambedkar Jayanti 2021: inspiring quotes and history of Babasaheb

Why We Can’t Trust Warm Weather to Stop Coronavirus