by admin
in Women Entrepreneurs of the year 2020 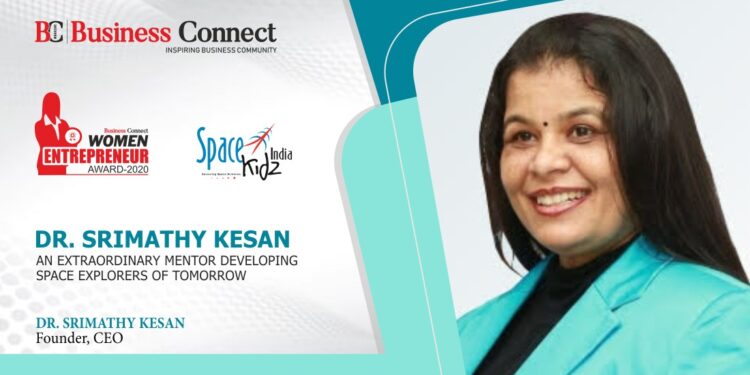 Whether it’s a child or an adult, thinking about the outer space exploration always sends a chill down the spine. Over the years, science has delved a significant extent of the space but still, there is a lot to be explored. In India, space entrepreneurship is a very unique and unattended arena. Dr Srimathy Kesan has excavated the space entrepreneurial arena and is shaping ‘young scientists’, for the new India.

Dr. Srimathy Kesan was born to very enthusiastic parents, who encouraged her since childhood to follow her aspirations. Since her school days, Dr Srimathy Kesan was an ardent student with interests in Sports and NCC. While pursuing her B.Com, she represented Andhra Pradesh in 10 Basketball Nationals, and, was also a State athlete. But the life of an aspiring woman is always laid with significant challenges and Dr Srimathy Keson had to face a similar fate. She got married at the age of 18 and became a mother by 20; making her take a 16-year long sabbatical.

However, perseverance and diligence are some of the common qualities a woman carries with herself. Even after such an intermission, Srimathy Kesan came back – determined to create something innovative that can reshape her career and addresses societal development too. She took up a variety of activities, to explore her talents like giving voice-over to making ad films and penning scripts, fashion choreography, etc. that too in a day! Reflecting her hard work, she says, “Life has often been unfair and harsh to me, but persistence has always helped me manoeuvre to my destiny”. After spending quite an arduous period, Srimathy Kesan came across one of her NCC campmates – Ms. Reema Sisodia, who motivated her to enter the entrepreneurial realm and also proposed her name for an international travel conference at Florida (USA), in February 2009. This trip became the turn-key for Srimathy’s life.  The conference allowed her to represent India before 10,000 delegates.

After, returning to India, Srimathy Kesan started delving into an uncharted avenue – ‘Space Education’. Srimathy wanted to bring transformation in the Indian Education System; hence she founded Space Kidz India (SKI). The prime motivation was to groom young Indian minds into future scientists so that they outshine the Country’s name across the globe.  However, challenges did not end for Srimathy. Paperwork and processing US visas, for children, was an arduous task. Nonetheless, she mobilized as many as 108 children from 8th to 12th standard in the 12-16 years age group. From there on, the journey has been spellbinding. The Company has designed and launched CubeSats, BalloonSats, organized Science awareness camps / Astro camps / Astrobiology camps to NASA, ESA, and GCTC. Also, they have their own Launchpad facility for launching balloon satellites. Contemplating to her journey, she says, “I am a very ambitious entrepreneur, not for growing my kitty but very ambitious in spreading knowledge in science amongst the youth of the country and creating more scientific entrepreneurs for the country”.

As of now, SKI is designing a small rocket that will carry a payload between 1 and 10 kilos. It will be an educational project and having about 8000 higher education institutions in the Country, will help them launching it to the sky. SKI already has 12 Baloon Satellites, 2 Sub-Orbital satellites and 1 Orbital Satelite rotating earth’s axis. With experience, SKI has spread its wings of research to agriculture – earth and space, blockchain Solutions and redefining knowledge for the student community.  In short, SKI is not just a traditional aerospace company but an advanced platform, giving your dreams of exploration, wings!

R&D – THE NUCLEUS OF SKI

Space, is one of the vast and unsolved mysteries of the universe. In India, only handful companies have an acute knowledge of this boundless extent. The space Industry includes the generation of scientific knowledge, the diffusion of innovation, and the creation of markets; in fact, space technology touches and enhances practically every aspect of life on Earth. Relating to that, Srimathy Kesan and her team conceptualize every mission with a certain objective and uniqueness.

R&D is a key instrument that helps them address innovation in every project. Globalization has significantly influenced the world. Exemplary innovations like AI, ML, IoT, etc. are reshaping the industry. From automobiles to radiology/oncology diagnostics digital advancements have created a revolutionary transformation. The same transformation is inculcated, by SKI. With a prime focus to create “Young scientists”, for our country, the Company has prioritized R&D, as a profound pillar. Their exemplary work with respect to creating the world’s lightest satellite is a sound example, of R&D. “Evolving with innovation, bringing youth together from across the globe with no boundaries helps us changing the impossible to possible”, acknowledges Srimathy.

A PRODUCT OF CONJOINED EFFORT

SKI is not handheld by a single persona, rather 25 creative researchers, whose cohesiveness make SKI an innovative family. Every individual is well-defined in their areas and comprehends to their responsibility towards strengthening keeping mental frame and happiness of the family. SKI has concluded 15 + projects and mentored 2000 + students; every member is an integral component of this achievement. Srimathy’s empathetic nature further, attributes this culture. She ensures an atmosphere of integrity and engagement that blossoms this family, altogether.

COVID-19 AND ITS DISRUPTIONS

COVID-19 has become the most infamous global health calamity of the century, that has created severe health, economic, environmental, and social challenges to the entire human population. Pertaining to this, Companies – irrespective of size and vertical needs to emphasize on execution, innovation and ideas while husbanding what cash reserves they have.

SKI, being in the education sector has taken a significant impact. For now, they are waiting for the market to revive from its wounds as no mistakes can be spared, concerning launches and technological aspects as they’re considerably expensive.

A LEADER WITH MANY TEXTURES

Due to her vivid ideas and experience, Srimathy kesan has become a celebrated leader in the educational realm. She has been a guest speaker in many Educational institutions, where she shared her experience to enlighten students and aspirers about career opportunities in the industry. Srimathy Kesan is a very enthusiastic leader, with deep love towards work and life.  She is an ardent reader of biographies and inspirational stories, but also believes, self-motivation is her biggest strength.

Her astounding leadership has helped SKI place several landmarks in its journey. SKI was the only organization to represent India in the London Olympics, 2012. Srimathy Kesan has been honoured, with the Ambassador Status at the NASA Space Camps at KSC, where her she motivated 1500 Young Astronauts from All over India to participate in these camps. Also, she has been bestowed, with Ambassador status to the Gagarin Cosmonaut Training Centre, Moscow.

Adding to this, Srimathy Kesan has invested herself in several social developments. Following are some notable mentions:

She is also an Ambassador, for Breast Cancer Awareness at World Peace Foundation and has undertaken several AIDS-related awareness programs and fundraisers.

SKI’s growth has been highly stimulated, by its uniqueness in the Space Industry. It stands pride as the prime for building and launching the world’s smallest satellite. As time unfurls, SKI is looking to bring more innovations and talent and grow SKI into a World-renowned Space University with manufacturing facilities in India.

Also, with finance ministers opening up the partnership opportunities between private players and ISRO, the Company is foreseeing to build relations and utilize ISRO’s infrastructure to build and launch small rockets.

A MEMO OF INSPIRATION

“Women entrepreneurship is relatable to the journey of a mother conceiving a child – enduring yet beautiful. Every woman should aspire for entrepreneurship not only to measure her capacity but also to be integral to the country’s development”. –  Dr. Srimathy Kesan 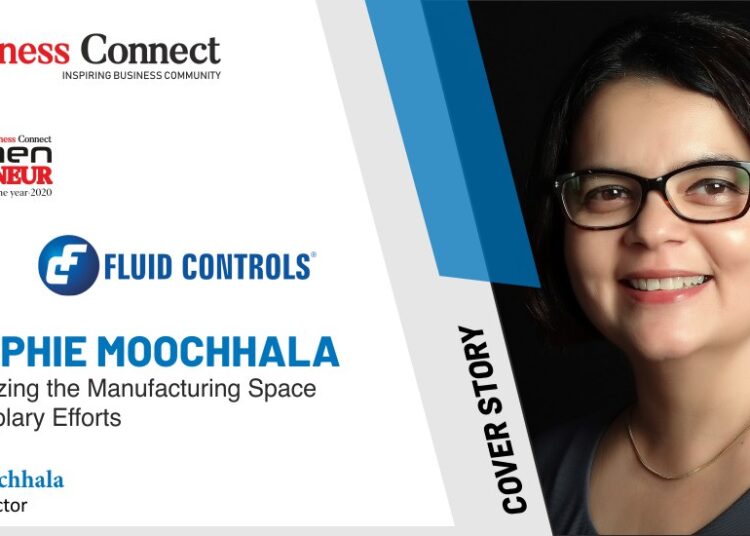 SOPHIE MOOCHHALA: REVOLUTIONIZING THE MANUFACTURING SPACE WITH EXEMPLARY EFFORTS “Follow your passion — and if you don’t know what it... 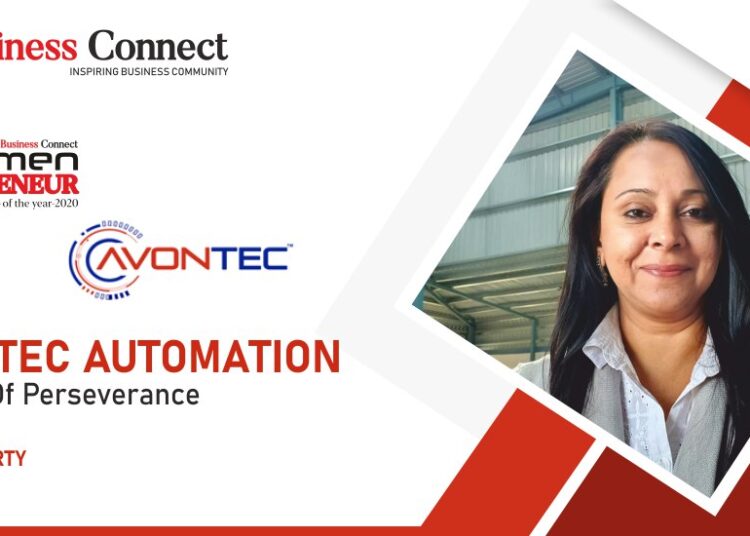 Avontec Automation: A Story Of Perseverance Written by: Kriti Anand The Entrepreneurial Journey “Success and learning come from the worst...