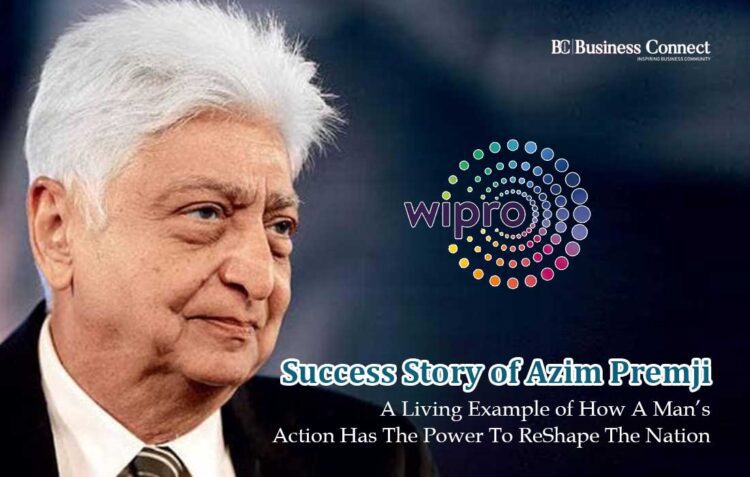 Success story of Azim Premji: A living example of how a man’s action has the power to reshape the nation.

A man is known by the legacy he leaves behind. Azim Premji is a living example of how a man’s action has the power to reshape the nation. Azim Premji’s work has been a big reason for the development of India’s global image. Premji is certainly one of the forerunners in expanding the IT industry in India and gradually making the world witness India’s hold on the IT sector.

He is a living legend and here are a few reasons why we say so.

Bill Gates and Warren Buffet started a campaign ‘The Giving Pledge’. The campaign encourages the wealthiest people to make a commitment to donate their wealth for a charity. Azim Hashim Premji became the first Indian and the third non-American to sign up for the campaign. He gave away one fourth of his wealth for this campaign. You know the greatness of a person by his ability to contribute to societal needs.

Most Substantial Indian on the Hurun India Philanthropy List.

Azim Hashim Premji, as you would have thought, was rated as the most substantial Indian on the Hurun India Philanthropy List.  Premji has funded 80% of the total donations made by 36 Indian philanthropists who gave over Rs.10 crore to charity.

After the magnificent rise of Wipro to be a corporate leader, Azim Premji began addressing the social cause. He focused at the grass root level i.e. the ‘Indian Education System’ and sensed the necessity to contribute for a societal reason. Education has a direct impact on the nation’s social, cultural and economic development. Thus, in 2000, he started Azim Premji Foundation. The foundation has institutes in the most deprived regions of India. The field institutes generate opportunities for the advancement of teachers and education officials through well planned workshops and trainings. They also work to reform the school curriculum. The foundation gives employment to more than a hundred employees’, works in eight states, and is working to change the lives of a large number of students, since 2000.

Azim Premji has received numerous accolades during his lifespan, most notably India’s second highest civilian honor, Padma Vibhushan, for his contribution to business. Business week mentioned Azim Premji as one of the greatest entrepreneurs of all time for the rise of Wipro. As per India Today April 2017 list, he stands as a ninth most powerful Indian. In the year 2005, the Government of India granted him with the title of Padma Bhushan for his exceptional effort in trade and business. He is one of the 100 most influential people of the world.

Azim Premji took over the charge of Wipro due to the sudden demise of his father. He was then studying in Stanford University. He left the college midway and took over the business. Wipro was then called, Western Indian vegetable product. At the age of 21, he became the chairman of the company, despite the protest by the shareholders. He extended the enterprise’s commodities list to include hydraulic cylinders, soaps, lighting products etc.  Western Indian vegetable product was renamed as Wipro in 1977. In 1980, Wipro entered the IT sector. It started expanding and got into many other lines of business like medicine, lamps, powder and more. Under the management of Azim Premji, Wipro grew multifold from a $2million cooking fat business into a multinational organization with the worth of US $7billion.

Take charge: At the age of 21 he took charge as a chairman of Wipro. Taking charge requires self-belief, confidence and this defines a leader. Leadership comes from within when you decide to take challenges grittily.

Excellence is a journey: No matter what you do, there will be a better and improved way to do things. You need to keep upgrading your skills to stay at the top.

You can make a difference: Last but not least, let us understand this through a story. There was an old man who went to the beach every day. He picked up a fish which was cast away on the shore due to a rising tide and threw it back into the sea. Every time the tide came, it brought along a lot of fish. The old man patiently picked up a fish and threw back into the sea. After a while a young boy approached the old man and said that the old man can’t throw away all the fish as there are so many. The old man replied that he can’t make a difference in the lives of all the fish, but he certainly can make a difference in the life of one. Our every action, however small it may be, can certainly bring a change in someone’s life.

“I strongly believe that those of us, who are privileged to have wealth should contribute significantly to try and create a better world for the millions who are far less privileged”— Azim Premji (AP)