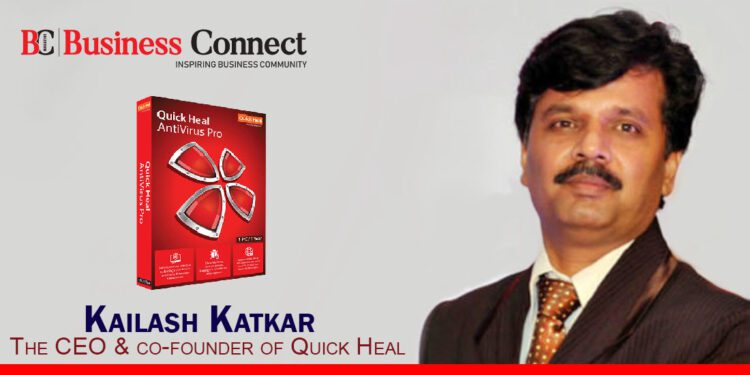 Our society has taught us that without getting good degrees you cannot achieve anything at all. but truth is, there are a lot of people out there who have created history without holding any degrees. All you need to do is keep focusing on your skills and move forward with full confidence. Today I want to share a success story about an entrepreneur who has built an IT company without getting specific degrees. His name is Kailash Katkar he is Co-founder and MD of Quick Heal. People who want to start a company may motivate you to figure out a way to take action. I hope you are going to enjoy the story.

Kailash Katkar is co-founder of Quick Heal. The company provides IT Security solution and located in Pune India. Today, Quick heal is providing service on the most major countries like the USA, Japan, the Middle East, and many others. The company has more than 2000 employees in India. in 1993, Kailash Katkar and his younger brother Sanjay Katkar found this company. Most of the important thing about Kailash Katkar, he has not any professional degree.

He started his career by reappearing the computer. Initially, he used to repair a calculator, lesser posting machine, and many other machines. He was having an annual contract to fix those machines. Afterward, he improved the skills by himself and started doing computer maintenance work which helped him to know more about computer issues. it was 1990 when his younger brother Sanjay Katkar came out from high school and decided to go for electronic engineering. However, seeing the serious issue on the computer which made him encourage his younger brother to go toward in computer course. Sanjay Katkar completed BCA, and then MCA. During the BCA, his brother used to come at his shop to practice programming language. A few months later, His brother Sanjay Katkar curious mind stared looking real project. Kailash Katkar gave the suggestion to his brother to find a solution to remove viruses in computers without formatting. Kailash Katkar says, back in the 90s, people didn’t like to buy antivirus software due to high cost (between 12000 to 15000). They would prefer to give their machine to a computer technician. At the time, most of the technicians used to format computers and reinstall the DOS (that is not good for computers.)

His brother started researching on it. Later, his brother created software to remove Michelangelo viruses. His brother kept developing new tools to remove other harmful viruses. Kailash Katkar had a computer maintenance contract so he stated installing antivirus tools in a computer without charging any money. He informed his customers about the tools and guided them to run the tools. Later, customers were appreciating his effort and gave him the advice to create an antivirus that motivated him and his brother to created new antivirus. Now Kailash Katkar had a big challenge on how to sell the antivirus in the market, having no marketing experience, he had to face a lot of problems. His product was becoming popular. But the main problem was, he was not getting money on the time. So, he started looking market expert who helps him to sell the product directly.

Quick Heal is an IT security solutions company that develops security software for PC, Mac, tab, etc. In the beginning, the company was called CAT Computer Service Ltd. In 1995 the company started as a computer service centre. After developing antivirus, the company received a name called Quick Heal Pvt Ltd. The company sells the product directly and also available in the computer shop.

In 2010, the company received an investment of 60 Crores from Sequoia Capital. In 2012, the company launched the product in Japan and the US.

Some Award and Recognitions

In 2010, the company got the recognition of the lifestyle and Gadgets award by NDTV.

In 2016, Best Antivirus, 9th NCN most innovative product of the year.

In 2019, the Quick Heal computer protection company got recognition by NASSCOM’s DSCI.